Ms Ashton, formerly known as Christine McQueen, told InvestorDaily she has now taken out seven applications for merchant services with various banks, but all of them have been rejected.

The worst dismissal, she said, was one she copped from NAB, which consisted of both a phone call and a letter. Ms Ashton commented the major bank was the only institution who gave her a straight denial of service due to her occupation, likening it to “hysteria.”

“I did an application with NAB and they really treated me like they were taking out the garbage,” Ms Ashton said.

“It was very, very clear. They said, they refuse to take sex workers, ‘we don’t know how this got through.’”

Ms Ashton reported she initially had merchant facilities with Bendigo Bank around a decade ago, but her services were cut off after she complained about a number of chargebacks, where she was being demanded to return money on account of clients claiming fraud.

“One of the chargebacks was a person who claimed that someone had impersonated him and the merchants agreed with that,” Ms Ashton said.

“I managed to get the building to give me the security footage and it was absolutely him but they accepted it. I was so horrified. I feel I just had a very puritanical version of wrong and right, like obviously we were right and that they would be following suit.

“And in that moment, I realised what the game actually is how they see it when they feel like it, generally. And that in fact, it’s the house that wins. It’s not about their policies.”

Ms Ashton later used merchant services with ANZ a couple of years ago, who she said cut her off after a week, after she gave paperwork where she wrote “sex worker” as her occupation.

But while Ms Ashton has been successful in gaining credit, such as for home loans, in her experience, the banks “can’t make it go both ways.”

“So they’re more than happy to take my fees, but they won’t handle my merchant services.”

Over her career, Ms Ashton says there have been no changes – rather, the discrimination has become worse.

“I can now clock it because I just had so many dealings with this, not just in financial services, I can pick it up in other services when I’m on the phone. I can tell the discrimination without them having to change their dialogue, they’re reading off a screen.

“As a person, my banking should show I am absolutely the right candidate. [But] I feel like it diminishes me. I feel like it’s a very high cost to pay, to feel diminished, for a rejection. Okay, they rejected my application, but it’s more than that, it’s to diminish me as a person.”

MP calls for clarity from banks

In September, Victorian MP David Limbrick charged NAB as the worst culprit out of the banks for “corporate slut-shaming” in the Senate, declaring he had been informed the institution had closed the accounts of sex workers.

Mr Limbrick informed InvestorDaily he has since then been in discussions with representatives of organisations of sex workers and financial institutions, noting NAB has publicly stated it does not discriminate against sex workers.

A spokesperson for the bank has previously told InvestorDaily NAB still services independent sex workers and its policy falls in line with other major institutions. The major bank decided earlier this year to stop servicing brothels and escort agencies.

“I urge other financial institutions to go public and state their positions so that there can be more certainty about this,” Mr Limbrick said.

“Sex workers definitely feel that banks may have discriminated against them in the past. I hope in future some financial institutions will see this as an opportunity rather than a problem, and actively seek out their business.”

With the exception of ANZ, the big four all have policies that can restrict their services to sex workers to some extent.

A spokesperson for CBA said it deals with customers on a case-by-case basis, accounting for environmental, social and governance (ESG) considerations into each of its lending and business decisions – the company said it may cease a banking relationship if it perceives there are risks such as criminal behavior.

“We assess customers and transactions in accordance with our sustainability risk management framework. We take an inclusive, non-discriminatory and precautionary approach, while respecting the intent of jurisdictional laws.”

ANZ on the other hand told InvestorDaily it has “no restrictions on providing products or lending to individuals employed within the sex work and adult industries,” taking anti-discrimination laws into account.

For Ms Ashton, the buck has not stopped at the banks, she declared she also been denied use of merchant services across digital financial services providers.

“So now we move into the era of apps,” Ms Ashton said.

“That’s the big one, because it’s basically American-based companies. Essentially all the big ones that have a global policy, irrespective of local jurisdiction, have criteria for what is allowed to be for this pipe out and it goes in this list of 200 apps.

She criticised Australian payment vendor and merchant service aggregator Square for blocking sex workers, particularly in decriminalised states such as Victoria and NSW.

“I don’t understand how they’re not forced to serve us. How come they’re not made to do that? They shouldn’t be allowed to continue this.”

As a result of not being able to conduct business transactions through merchant facilities with the banks, Ms Ashton has to use only cash and electronic funds transfer (EFT).

She pointed to the end of the year around holiday season, when people tend to spend more and send everything to their credit card – Ms Ashton noted she can’t “enjoy the benefit of credit card extensions or payments” with her clientele and she’ll miss out on that revenue.

Not all clients are comfortable with carrying cash, Ms Ashton said, being mindful that she is also missing out on more potential income.

“My office is continuously contacted by sex workers who have complained they have been denied banking services such as merchant facilities to allow them to conduct their business,” Ms Carnell said.

“This is an ongoing issue and we have expressed our concerns to the Australian Banking Association and individual banks involved.”

Ms Ashton stated she knows of other sex workers that have experienced the same discrimination as her, yet many she said, are not forthcoming, with some not declaring their occupations or even banking.

But she hopes to team up with others to one day take the banks on with a class action.

“There’s never been a call for that,” she said.

“My dream is to be a part of something like that, because I feel that they’re not going to give it to us, so we have to prise it open.” 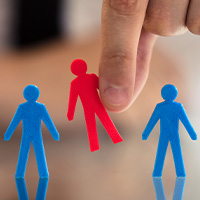