Mr Wilson, chair of the House of Representatives standing committee on economics, has asked a number of financial institutions for information around human resources issues, sexual harassment and related non-disclosure agreements since the public fallout at AMP.

According to Mr Wilson, while other organisations have already answered the question on notice, IFM has chosen to not yet respond.

Mr Neal, who has recently taken the role of chief executive at the company after leading the Future Fund, told the committee on Friday that there had been no non-disclosure agreements in relation to any sexual harassment claims in the past decade.

But as Mr Wilson pointed out, former IFM executive director Frederic Michel-Verdier, who was London-based, had been at the centre of a lawsuit after being accused of sexually harassing infrastructure analyst Nathalie Abildgaard.

IFM settled the suit for $493,000 and Mr Michel-Verdier departed the group in August last year.

There were reports that Mr Michel-Verdier was provided bonuses worth 20 million pounds (around $36 million), which Mr Wilson feared came “out of funds invested by superannuation funds”.

IFM is owned by 27 superannuation funds and is managing around $163 billion, according to recent Thinking Ahead Institute research.

“To say there are none [non-disclosure agreements] related to sexual harassment would surprise me, because that seems, and I have to go back and check, that is inconsistent with the evidence that IFM Investors provided previously,” Mr Wilson said in the proceedings on Friday.

“It’s very important to understand that we absolutely did not seek to prevent what is now our former employee, from speaking about her experience in any way,” Mr Neal responded.

He added Mr Michel-Verdier left the company for unrelated reasons.

“So he did not leave because of sexual harassment allegations?” Mr Wilson asked.

“No, he left to pursue his own business interests,” Mr Neal said.

“So, he was paid a full severance associated with his position, including bonuses alleged to be up to $36 million?” Mr Wilson replied.

Mr Neal declined to answer, saying the company does not publicly disclose how much former and current employees are paid.

“Well, it’s funny because all of the entities seem quite happy to answer this information in a de-identified way, in fact we sent tables to the big four banks, super funds, everyone else and everybody has been happy to answer it, except IFM,” Mr Wilson said.

“When we have allegations, sorry I should say more correctly, it was more, he was boasting about his $36 million in bonuses. In light of the fact that as you say yourself, you’re a collective vehicle with a distinct structure, owned 100 per cent by Australians’ compulsory retirement savings.

“I just find it extraordinary, it would be much easier to say it’s not true, he’s not had bonuses anywhere near that number or even within tens of millions of dollars, but at this point, IFM is just not prepared to do that.”

The MP added he was thinking of the funds contributed from Australians and their compulsory savings, going towards executive pay packets.

“You would accept at least the $36 million, if that were a bonus for a single fund manager, that is a lot of money,” Mr Wilson said.

“I would accept that $36 million is a lot of money, but that is pure speculation and the moment we start answering questions about individuals all our confidential information disappears,” Mr Neal said.

“It’s a point of principle that we don’t divulge any information about specific individuals because it’s their private information and it also goes to the commercial arrangements that IFM has with its investment team and it’s that investment team that’s generating the billions of dollars for our superannuation members.”

He continued to deny that IFM could provide the information, even in a de-identified manner. But Mr Neal said he was confident the company’s pay arrangements are in line with the rest of the industry, as the company supposedly benchmarks itself against its competitors.

IFM has previously faced scrutiny from other politicians as well as the economics committee, around executive pay. Superannuation assistant minister, Senator Jane Hume, condemned the investment manager in February following reports it paid out a $12.7 million bonus to an unnamed director.

In a hearing on 10 September, Mr Wilson asked Mr Lim about investments provided to The New Daily from Industry Super Holdings.

The IFM deputy chief responded that the matter was confidential, it could be prejudicial against The New Daily and he could not provide the information to the committee.

Mr Wilson reported he had subsequently sought the ASIC copy of financial statement reports from Industry Super Holdings, with the information being “completely publicly available”.

“So he’s consciously chosen to provide misleading information to this committee. So my question is, is this a normal practice in IFM to mislead parliamentary committees?” the MP asked.

Mr Neal responded: “No of course it isn’t Chair, and I imagine that was a mistake from Mr Lim.”

Later in the proceedings, the CEO said he had not been given any prior notice around the allegations against Mr Lim.

“We wrote to the committee, noting that we thought it was not appropriate for Mr Lim to be asked what political party he may or may not be a member of,” Mr Neal said.

“And so we did write to the committee to suggest that but I’m not aware of any discussion around any inappropriate or misleading evidence that Mr Lim gave.”

The matter will be followed up, Mr Wilson promised, commenting it could be considered as contempt of Parliament. 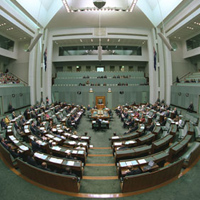