Research from Carbon Black and Optiv Security, Modern Bank Heists: The Bank Robbery Shifts to Cyberspace, has found that there has been a 160 per cent increase in destructive attacks over the past twelve months.

The report found that 67 per cent of financial organisations had reported an increase in cyber attacks over the past twelves months and 26 per cent were targeted by destructive attacks.

One of the report’s authors and chief cyber security officer at Carbon Black, Tom Kellermann said the report raised concerns for the industry.

“Financial institutions are grappling with some of the most sophisticated cybercrime syndicates.

“Perhaps the most concerning indication from this report is the stark increase in destructive attacks, which are rarely conducted for financial gain,” he said.

Mr Kellermann said it seemed that these attacks were launched to destroy data and banks needed to be aware of this approach.

“Cyber criminals have formed sophisticated approaches to gain access to confidential banking and financial information and organisations need to be aware of the impending threats,” said Mr Kellermann.

Despite many attacks being to destroy data, financial institutions by and large (70 per cent) were most concerned about financially- motivated attackers.

Some of the other key findings of the report was that 79 per cent of financial institutions said cyber criminals had become more sophisticated and 21 per cent had experienced a site hack where visitors were misled to malicious pages.

The report found that the top threats for finance were all trojan in nature, with the top threat being the Generickd Trojan (36.3 per cent), where stored files are encrypted and a ransom is demanded.

Optiv Security’s vice president threat management Bill Young said that as criminals grew in sophistication it was important to evaluate their digital footprint.

“By using an inside-out approach to cyber security – starting with risk mitigation and building out from there with strategy, infrastructure rationalisation, operations optimisation and ongoing measurement – we believe financial institutions can close vulnerability gaps and respond to new threats in systematic ways,” said Mr Young.

The report by Carbon Black and Optiv will become an annual report in order to educate institutions on what attacks to look out for. 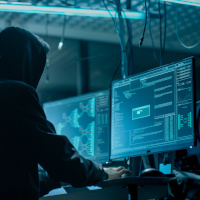