The majority of Australians are now using digital payments, with the potential for fintechs and ‘buy now, pay later’ systems to present a threat to existing banks according to new market research.

Roy Morgan’s ‘Digital Payment Solutions Currency Report’ for November 2018 found 72.4 per cent of Australians are using at least one digital payment method over an average year.

The analysis firm said the jump is reflecting the nation moving towards a cardless and cashless society, with awareness among Australians of digital payments being identified as almost universal at 93.9 per cent.

Norman Morris, industry communications director, Roy Morgan, said increasing use is being aided by the growing proliferation and development of smart phones and wearables integrating new payment methods, as the technology moves from early adopters through to mainstream users.

“All these changes pose a threat to traditional payment types such as credit cards and cash as consumers in effect can access small amounts of credit instantly,” he said.

“Consumers will increasingly want simplified and convenient payment systems and the industry will need to adapt to these expectations by providing more innovative solutions.

“Traditional financial institutions may need to collaborate with fintechs and other third parties to keep up with the rapidly changing digital payment environment.”

During the 12 months leading up to November, 7.2 per cent of the Australian population aged over 14 (1.5 million) was seen to have used relatively new ‘buy now, pay later’ systems such as Afterpay, zipMoney and zipPay.

Fintechs, other newer digital systems outside the major banks including Android Pay, Apple Pay, Samsung Pay and Google Wallet, were used by 6.8 per cent (1.4 million) over the last 12 months, a higher figure than the banks’ own mobile payments systems at 5.8 per cent (1.2 million).

Younger generations have been the top users of ‘buy now, pay later’, Roy Morgan said, with 11.5 per cent of Gen Z Australians using the method and 11.4 per cent of Millennials, well above the average of 7.2 per cent.

Younger users have also been leading in fintechs, with 10.6 per cent of Gen Z using examples such as Apple Pay, along with 10.4 per cent of Millennials.

Older generations were found to be far less prominent in their usage, with ‘buy now, pay later’ only capturing 0.2 of a percentage point of pre-boomers and 1.8 per cent of Baby boomers. Meanwhile, Gen X, at 6 per cent, is only marginally below average.

In fintechs, 0.6 of a percentage point of pre-boomers, 2.2 per cent of Baby Boomers and 6 per cent of Millennials were found to be users.

However, male users at 8.8 per cent, topped their female counterparts (5 per cent) in the fintech realm.

Users of the latest technology, as shown by the Roy Morgan Technology Adoption Segments, are the most likely to use fintechs.

These ‘technology early adopters’ have a very high 12.4 per cent using fintechs, compared to only 2.4 per cent of those considered to be ‘technophobes’.

The data in the report was based on interviews conducted with more than 50,000 consumers in the 12 months leading up to November 2018. 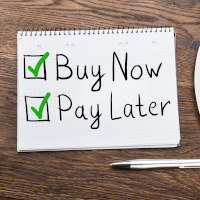