Leaders in financial services need to recognise gender inequality in the sector and demonstrate empathy to bridge the gap (particularly male leaders), a managing director said.

Speaking to InvestorDaily ahead of the ESG Summit due to be held in 2022, managing director of exchange-traded managed fund company ETF Investments Australia (eInvest) Camilla Love said that the most significant issue plaguing the financial services industry is the misperception between the genders about the extent of gender inequality in the sector, and the amount of action being taken to remedy it.

“If you think about people in power who are making decisions, a lot of them are men. Is that hindering the process?

Ms Love suggested that unless male leaders empathise with their female colleagues, they would fail to understand the barriers women face in the industry.

“There are lots of great people who are doing that, but until male leaders think that there is a problem to solve, there is a lack of impetus to do it,” she said.

Ms Love’s position has echoed recent survey findings from the Financial Services Institute of Australasia (FINSIA), which revealed that 77 per cent of male respondents were either neutral, agreed or strongly agreed that the gender pay in financial services was grossly exaggerated compared to just 40 per cent of female respondents.

This included 25 per cent of males who admitted they strongly agreed compared with only 3 per cent of females.

Ms Love said that while pinning down the reasons for gender inequality in the industry is difficult, it could stem from both the demand side and supply side.

On the demand side, behaviours and practices such as unconscious bias during the recruitment process, and lack of advertised positions (and therefore lack of transparency), could be preventing more women from raising their hand for the job.

Furthermore, organisations with retention policies such as flexible working arrangements and attractive leave policies would be appealing to more women, Ms Love said.

On the supply side, she said some women lack confidence, while others hold misperceptions about culture and the work/life balance within the industry.

“Making a grassroots impact in your organisation by choosing employees with different skill sets will make the financial services industry way more profitable,” she said.

In September, the F3 Project, in partnership with the Financial Planning Association of Australia (FPA), announced a scholarship for young women working in financial services.

The FPA – as the custodian of the government’s $1.5 million grant to improve gender balance in the finance industry – awarded $25,000 to F3 to fund 20 work experience places to encourage more women to pursue a career in financial services.

The 2022 ESG summit – which will be held in Sydney on Tuesday, 8 February and in Melbourne on Thursday, 17 February – will deliver a full day of expert-led sessions, keynote addresses, panel discussions and networking opportunities, providing a unique look at the evolving ESG landscape, and the strategies required to engage socially aware and proactive clients as everyone will experience the greatest wealth transfer in history.

Joining Ms Love for a panel discussion to deconstruct the “S” in ESG is Pivot Wealth founder Ben Nash and Fox & Hare's Jessica Brady, who will aim to help practice leaders pave the way for a brighter future, attract new talent and expand their client base by advocating for a diverse, socially minded industry.

To hear more from the panel about why a long-term focus on a diversity could offer greater value to clients, and what strategies you can implement to achieve this, come along to the summit in Sydney and Melbourne.

Click here to secure a spot today and make sure you don’t miss out!

Leaders in financial services need to recognise gender inequality in the sector and demonstrate empathy to bridge the gap (particularly male leaders), a managing director said. 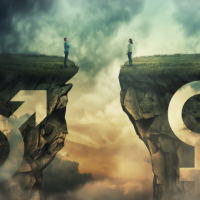