Labor has continued to attack the government over its implementation of the royal commission recommendations despite not having produced a full response to the final report.

Bill Shorten spoke in Canberra yesterday and accused the government of delaying the clean-up of the financial industry.

The Opposition leader announced that he would introduce three new private member bills as reported by Investor Daily yesterday.

The bills will deal with five key recommendations from the commission and revolve around commissions, AFCA processes and consumer protections.

“It’s now the time for the Parliament to debate the laws and get on with protecting people so no-one suffers now because we have a part-time Parliament,” said Mr Shorten.

Commissioner Hayne in recommendation 2.4 stated that grandfathering provisions for conflicted remuneration should be repealed as soon as is reasonably practicable.

Opposition treasurer Chris Bowen said that the governments plan to enact this recommendation was not as soon as practical.

Mr Bowen said the industry would need time to adjust and implement and that the government waiting another twelve months was not a sign of them taking action.

Mr Bowen said the bill would focus on funeral insurance and that it would enact more protections immediately.

“That should not go on one day longer. Now, the legislation we have prepared will come into force on royal ascent – in other words, immediately,” he said.

Labor’s other bill seeks to strengthen AFCA processes in line with Commissioner’s Hayne recommendation that section 912A of the Corporations Act 2001 should be amended to require ASFL holders take reasonable steps to co-operate with AFCA in its resolution of disputes.

Shadow minister for finance Clare O’Neil said it was vital that banks be obligated to deal promptly and directly with the authority.

“When you see the bill, you’ll see that this is actually dealt with in a number of lines in a piece of legislation and there is absolutely no reason why the Parliament can’t get along now and make that change,” said Ms O’Neil.

Mr Bowen said that there were more announcements to come but many of the recommendations were more complicated and required time.

“There are other things we accept and have said from the outset, that are more complicated, that will take more time, that need more complicated drafting and consultation – that even the royal commission doesn’t recommend be done urgently.

“There are some elements of the royal commission in that category, but others that we should be getting on with now,” he said.

Mr Bowen pointed out that Labor was ironing out the mortgage broking recommendations and they would announce that in the near future.

“We’ve been working with the financial sector, with consumer groups to consult about how the problem identified by the royal commission can be best addressed in a way which achieves that objective with minimum disruption,” he said. 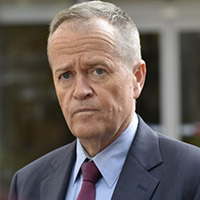