While Federated Hermes has been in the Australian market for about a decade, it’s now significantly stepped up its ambitions. Speaking to InvestorDaily, head of Australia distribution Gary Horton outlined the international asset manager’s plan to snare greater market share in the increasingly consolidated superannuation space

“You really have to be differentiated. You’re going to have fewer funds, bigger mandates. I think we’re going to weed out some managers – there’s just not going to be enough seats at the table,” Mr Horton told InvestorDaily.

Mr Horton concedes that the increasing drive towards internalisation as super funds compete to reduce fees is one obstacle to Federated Hermes’ goal, but one it will be able to overcome by leveraging its international footprint.

“You have to represent value in things they can’t take in-house,” Mr Horton said, noting that while superannuation funds are increasingly chasing returns overseas, they lack the capability to effectively engage with overseas companies.

“We can’t offer that service for Australian companies. I wouldn’t try and fool someone that we could do that because they have people here…AustralianSuper have people in Melbourne managing global equities. It’s very hard to engage a company when you’re based there.”

Mr Horton believes Australia’s ESG market is second only to the EU, and Federated Hermes’ long history in responsible investment and stewardship will work in its favour as super funds grapple with the effects of global climate change on their investments both domestically and internationally.

“Given how the market is consolidating, if we had half a dozen really big, deep relationships with these big funds – if we were an ESG or responsible investing partner to some of these bigger funds, that would be a success,” he said.

“We’ve seen a huge acceleration in consolidation. Do we end up with 20 large funds and maybe five or six retail hubs? To me that seems like where we’re going – but who knows? Some people are talking 10.”

But while Federated Hermes is eyeing superannuation, Mr Horton said that he’d be surprised if there was a large influx of international managers given increasing consolidation and fee pressure.

“It’s the most competitive fee market in the whole world. If you’re a US manager who can sell a product at US retail fees, why are you going to fly halfway across the world and set up an office and service it – and service clients – for fees that are considerably less?” he said. 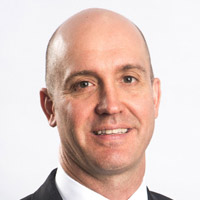