A battered Australian economy knocked about by the raging bushfires has only made a February rate cut look increasingly likely, analysts from Moody’s Analytics and Saxo Bank have said.

Katrina Ell, economist at Moody’s Analytics noted the direct economic costs from the blazes have been severe, including hits to agriculture, tourism, household spending and worker productivity from enduring air pollution.

As of 6 January, almost 6,000 insurance claims amounting to $375 million were related to the bushfires which have ravaged since November, according to the Insurance Council of Australia.

The total damage bill is set to rise significantly as the full scale of devastation reveals itself, with numerous fires still burning and yet to be contained.

“Odds were already high that the Reserve Bank of Australia will cut interest rates at its next meeting, in February, to bring the cash rate to 0.5 per cent,” Ms Ell wrote.

“The fires increase the odds.”

Saxo Bank has also taken this view, with Australian markets strategist Eleanor Creagh expecting the RBA will further decrease the rate once more in the coming year to 0.25 per cent.

“Raging bushfires, and a now resilient Aussie dollar lifting off support levels will only add to the ongoing pressure on the RBA, particularly whilst the government continues to sit on the sidelines leaving the heavy lifting to the central bank,” Ms Creagh said.

“The domestic outlook will continue to place downwards pressure on the currency’s recent rally and bond yields.”

‘Adverse spillovers to the broader economy’

The call comes after the Liberal government earlier this week established a dedicated national bushfire recovery agency to be funded with an initial $2 billion and shied away from its earlier commitment to restore the federal budget to surplus.

Further, on Thursday morning, NSW Premier Gladys Berejiklian and Treasurer Dominic Perrottet committed to allocating $1 billion to rebuilding fire-affected communities across the state over the next two years.

Ms Ell added for now, it is too early to determine if the fires will lead to further monetary easing measures – with the blazes still burning and government responses still being fully realised. Fiscal policy also tends to be “more appropriate” than monetary policy, she added.

“The risk of adverse spillovers to the broader economy [is] high given the scale of the fires as well as it being still early in the bushfire season,” Ms Ellis said.

“This bushfire season has months to run and could easily surpass the most costly recent fires, the Black Saturday fires in Victoria in 2009, which cost an estimated $4.4 billion.

But the bushfires are only one symptom of the longer term impacts of climate change, Ms Creagh warned.

“These impacts are not just a one-off, longer term effects of a warmer Australia will continue to pressure agricultural productivity, tourism and other industries,” she said.

“A continued increase in frequency of extreme weather-related events poses a long-term risk for the economy.”

Many homes and businesses have been disrupted, with water and power supplies cut off in addition to significant road closures and evacuations.

Ms Ell’s analysis noted rural exports barely grew in the last year, with “poor growing conditions” stifling production, and a variety of crops being further damaged by the fires. The result will be “upward pressure on consumer prices, given that most fresh fruit and vegetables consumed at home are sourced locally”.

Also expected to afflict the agriculture sector are the impacts of drought, unseasonably heavy rains and temperature changes – creating loss of farmland and production capacity as well as damaging crops and increasing costs from exposure to climate variability, Ms Creagh added.

In addition to the areas being directly affected, the country’s population has been estimated to have been vulnerable to sustained poor air quality since November.

In one week in mid-December, NSW Health recorded 1,357 emergency department presentations – in contrast to the five-year average of 916.

On Tuesday, 10 December, Sydney saw air quality levels ranking more than 10 times the level considered hazardous. On that day, there were 234 asthma and breathing problems presentations in NSW emergency departments, almost twice the average number of 130.

Likewise, Canberra has seen its AQI reach more than 20 times the hazardous level, higher than the world’s most polluted cities.

The OECD had estimated in 2016 that rising levels of air pollution globally would reduce economic output by 1 per cent in 2060, up from 0.3 per cent in 2015.

As a consequence, Ms Ell stated, there is reduced worker productivity, increased health spending and lower crops yields, as well as disruption to transport services from poorer visibility and impacts to hospitality from abandoned outdoor dining scenes.

And consumer confidence has further dwindled. Australians were already decreasing their spending – the air pollution and widespread devastation are only further deterrents, Ms Ell commented.

The Melbourne Institute-Westpac consumer confidence index deteriorated by 1.9 points to 95.1 in December.

“Household final consumption comprises around 55 per cent of GDP. With households buckling down further and expectations that the local economy will continue to weaken, the odds rise that consumer concerns will grow into self-fulfilling prophecy,” Ms Ell said.

“This has flow-on impacts to businesses. Domestic-facing firms already are struggling. Their concerns about the future are causing reluctance to invest, even though lending rates are at historic lows.”

The tourism industry has also been hit, with visitors holidaying across the south coast of NSW and Victoria told to evacuate.

The sector is significant to the country’s economy, contributing 3.2 per cent to GDP and 4.9 per cent to employment in 2016-17, according to Tourism Research Australia.

But Australia’s image as a clear aired haven in contrast to smog-infiltrated cities in neighbouring Asian countries has been challenged, Ms Creagh said.

Shane Oliver, chief economist at AMP Capital, noted the bushfires will be followed by a boost to spending, when rebuilding kicks in.

He believes although the bushfires are estimated to knock around 0.4 per cent from March quarter GDP – risking near zero growth or below, the risk of a recession remains unlikely.

Mr Oliver pointed to strong infrastructure spending and mining investment, and a weak Australian dollar boosting growth as well as further fiscal stimulus in the short term being likely.

But Ms Ell cautioned: “In this circumstance, rebuilding could be delayed for months, since many fires are ongoing, and this is only the start of the usual bushfire season. It could be some months before efforts move from fire containment to rebuilding.”

A battered Australian economy knocked about by the raging bushfires has only made a February rate cut look increasingly likely, analysts from Moody’s Analytics and Saxo Bank have said. 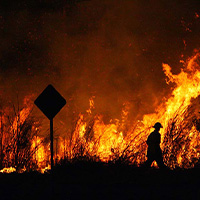