A DWS fund manager spent a week in Australia fielding the same big question from local investors: where to put their cash.

At a media lunch in Sydney on Friday (20 September), DWS chief investment officer for APAC and head of emerging markets, Sean Taylor, said there are still plenty of safer options other than equities for Aussie investors to get a return on their money.

“One of the big question's clients have been asking during my week in Australia is what to do with cash, or ‘how do we enhance cash?’” Mr Taylor said.

“A lot of people have been too cautious and they’ve lost out a lot this year. You don’t have to go to risky equities to get a return. You can go to infrastructure or real assets, which may not be as sexy as internet stocks, but they are a lot safer.

“We have had a great run in US and Aussie equities but we aren’t seeing the signs just yet that we should put everything back into international. Everyone wants to get onto the value trade but we’re not quite there.”

The Hong Kong-based fund manager doesn’t expect a recession in the US, China, Australia or Europe. However, he did highlight the major issue of negative deposit rates among European countries.

“We now have over $1.7 trillion of negative yielding assets in the world and getting worse by the day,” Mr Taylor said.

“From an Australian basis, you’re actually in a really good position because you have something on deposits. Sure, you might have a few more interest rate cuts to bring deposits down to 50 basis points, but you’ve got 1 per cent yield on treasury and a 1.5 to 2 per cent on corporate and a pretty healthy dividend yield still after the market has gone up on equities.

“That’s not a good situation in Australia compared to what it was four or five years ago, but you compare it to Europe where you’ve got negative deposit rates. In some countries in Europe, like Switzerland, you’re actually paying to keep your money in the bank.”

The CIO noted that many cultures in Europe are not equity cultures and have therefore been missing out on high-yielding stocks.

A DWS fund manager spent a week in Australia fielding the same big question from local investors: where to put their cash. 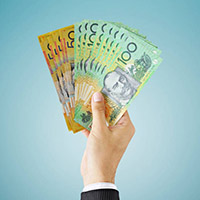