The asset manager has started questioning its investment approach after posting three quarters of underperformance.

Platinum Asset Management has had a “challenging” year, according to chairman Michael Cole, who notes in the group’s annual report this week that most of the company’s managed funds and portfolios lagged broader market returns for the 12 months to 30 June 2019.

“This underperformance translated into lower fund flows, lower investment performance fees and a consequent decline in earnings per share, and dividends for Platinum,” Mr Cole said.

Funds under management (FUM) at 30 June 2019 was approximately $24.8 billion, a decrease of 4 per cent from the 30 June 2018 closing FUM of approximately $25.7 billion. The reduction in FUM was driven by net fund outflows of $0.2 billion and the year-end net cash distribution and other capital outflows of $0.9 billion, which was only partly offset by positive market returns of $0.2 billion.

The group’s flagship Platinum International Fund delivered a compound return of 9.5 per cent p.a. over the five years to 30 June 2019 and a cumulative return of 57.3 per cent for the same period. Platinum managing director Andrew Clifford said that, on face value, this was a reasonable outcome.

However, it lagged the broader market significantly: in the last 12 months the fund returned 0.7 per cent against the market’s 11.3 per cent.

“This last year represents approximately three quarters of the fund’s underperformance over the last five years. The fund’s performance is representative of the performance of all our global equity mandates, which in total account for 65 per cent of our funds under management,” Mr Clifford said.

“The reason for commencing an analysis of our business with a discussion of recent investment performance is straightforward,” he said.

“As I wrote in my letter to shareholders last year, Platinum was established on the premise that we had an investment approach that had proven to produce good investment returns. While it has most certainly done that over our 25 years in business, it is certainly fair to question whether this has been the case in recent years.

“To answer this question requires some context around the composition of market returns and how we have positioned the portfolios in response to those returns. The other reason to discuss recent investment performance is that it is the best lead indicator of short-term fund flows and thus near-term business performance.”

Value has outperformed growth for much of the period since the 1930s, but has now trailed growth for 12 years, the longest period in history, Mr Clifford said.

While low interest rates have played a part, Platinum believes the changing risk preferences of investors provides a better explanation of the fund’s underperformance.

“Today, investors face a range of risks and variables that were, for the main part, not present prior to 2007,” Mr Clifford said.

“Negative or near zero interest rates are prevalent across much of the developed world, with over US$16 trillion in fixed interest investments providing a return of less than zero to their owners.”

The managing director also noted that the business landscape has become considerably more complex with many traditional businesses impacted by new business models due to the internet and growth in e-commerce.

“In addition, the political environment across the globe has deteriorated significantly. The most notable outcome has been the trade war initiated by the US, not only on China, but on many of its trading partners. Beyond this, there is also Brexit, the fallout over the Iranian nuclear deal, ongoing protests in Hong Kong, and India’s recent actions in Kashmir, just to name a few,” Mr Clifford said.

Platinum believes heightened risks have led investors to seek out businesses they perceive to be immune to well-known risks and avoid those that are susceptible, favouring consumer staples, real estate, utilities, and infrastructure.

“It is our assessment that this intuitive and fearful approach of the crowd has been critical in driving the differential in performance of value and growth stocks,” Mr Clifford said.

The asset manager has started questioning its investment approach after posting three quarters of underperformance. 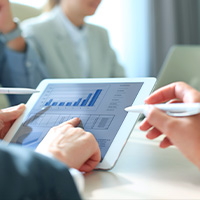