The Finance Sector Union (FSU) has urged the financial services sector to address its gender pay gap, in conjunction with Equal Pay Day earlier this week.

Equal Pay Day, which took place on 28 August, is a national marker of the additional 59 days women have to work from the end of the last financial year (30 June) to earn the same amount as men, based on ABS data on Australians’ average base salaries.

The day points to an average gap of 14 per cent across industries, however, as FSU national secretary Julia Angrisano noted, the gender pay gap in finance is 24 per cent.

“And so, when we in financial services apply the same formula to this figure, Equal Pay Day for the finance sector falls on 26 September,” Ms Angrisano said.

She added the pay gap has another significant impact for women, creating a gap in superannuation.

“I have been travelling around Australia speaking to groups of women facing the same issue: low issue balances that are exacerbated by the pay gap and companies with no real plans about how to deal with this issue,” Ms Angrisano commented.

The financial services industry has retained the highest pay gap out of any sector, as found by the government’s Workplace Gender Equality Agency late last year.

The difference is more pronounced when considering total full-time remuneration: the gap in financial services sits at 30.3 per cent, in contrast to the national average of 21.3 per cent.

A study by Fidelity earlier this year found a gender gap in investment was also greatly impacting retirement outcomes for women.

The Finance Sector Union (FSU) has urged the financial services sector to address its gender pay gap, in conjunction with Equal Pay Day earlier this week. 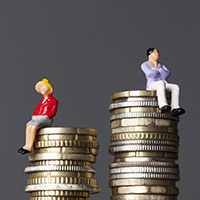