Interest rates will be lower for longer

The interest rate environment across the world is at historic low and it will most likely stay that way for years to come.

The warning comes from Shaun Roache, chief economist for Asia-Pacific at S&P Global Ratings, who said lower rates brought with it both positives and negatives.

“We're in a world of lower for longer and that brings good news and bad news,” he said.

Mr Roache was speaking at a recent S&P Global conference and said this rate environment had surprised many who thought rates may return to normal levels.

“A few years ago, we all expected a lift off in interest rates and going back to some sort of normal levels. Maybe lower than before the crisis but some distance from zero,” he said.

However it was clear that was not what markets were telling us and in fact neutral interest rates were going to remain very low.

“Look at the inflation index 20-year yield, before the crisis it was bouncing around 2 or 3 per cent and over recent years the yield has been consistently below 1 per cent,” said Mr Roache.

Mr Roache said the positive to come out of it was that lower rates extended the cycle, particularly if you looked at debt levels.

“Lower for longer means even though you have rising debt the debt service ratio remains stable,” he said.

“If you look again at previous cycles, even though Australian hasn't had a recession in a really long time when you get a global shock the RBA does cut rates and it cuts rates substantially below the neutral rate, the average rate,” he said.

But with rates sitting at 1 per cent, and the neutral rate at zero and inflation at one it meant the RBA had no room to move.

“So, what is the RBA going to do? They haven’t told us yet, but I suspect plan B has some flavour of QE about it and that's going to have very big implications for the yield curve and bond pricing as we enter the next slowdown and enter the next recession,” he said.

Mr Roache said S&P predicted that the US was going to cut once this year as an insurance cut and then keep rates on hold and Australia may do similar.

“In Australia rates are going to go further down … we expect another cut,” he said.

Interest rates will be lower for longer

The interest rate environment across the world is at historic low and it will most likely stay that way for years to come. 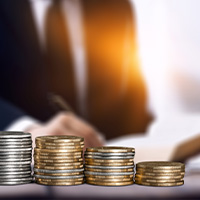