A global investment manager has pointed to the trade of ideas, rather than that of commodities, as the ultimate driver of global economic growth.

In developing the multiplier, he said that Vanguard looked at every academic paper, book and patent ever published in the past 40 years all around the world.

Further, it examined the bibliographies of journal articles to examine how ideas are influencing the next round of ideas and trace that through time.

Through the idea multiplier, Mr Davis said that Vanguard has created a leading market indicator of innovation.

“We created what we believe is the world’s first leading indicator of innovation, not for where the rate of growth will be tomorrow, but believe it or not, what the rate of innovation will be five years from now,” Mr Davis said.

Mr Davis said that the idea multiplier has doubled over the past 18 months and that, contrary to fears that the globalisation and trade of commodities has slowed down with the threat of tariffs, he is seeing “a phenomenal acceleration in the exchange of ideas leading to new ideas across borders”.

As a result, he said that an upturn in global innovation and productivity growth is coming in the near future.

“Fifteen years ago, China accounted for only less than 1 per cent of the influential ideas. By our idea multiplier today, that percentage is 25 per cent and growing really fast, so the power of globalisation is ironically leading to potentially a future for growth,” Mr Davis said.

A global investment manager has pointed to the trade of ideas, rather than that of commodities, as the ultimate driver of global economic growth. 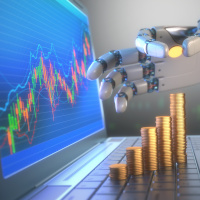