Do not fear global politics when investing: Morningstar

A Morningstar executive told the annual Individual Investor Conference that there was not a lot of global events that should concern investors.

Morningstar Australiasia’s head of equities research Peter Warnes gave the conference a series of predictions and said that there was only one global event that investors should worry about.

Mr Warnes discussed how demand and supply, or economics 101, were driving the economy, a process he said “even the white house might understand.”

“No matter what market it is, whether its iron ore, tomatoes or equities, the law of demand and supply will over time work,” he said.

However, there had been a recent switch in investors minds that saw them no longer looking for short term gains, which was a positive shift, said Mr Warnes.

“The mind has switched to long-term issues, i.e. lets stick it out while we figure out what’s growth going to look like in 2019 and beyond,” he said.

Mr Warnes did say however that the trade war could present an issue and his concern rested on the complacency of the war.

“The trade war is like the Monty Python Black Knight sketch. Black knight goes ‘I move for no man’ – bit Donald Trumpish, isn’t it? So, off comes the knight’s arm – ‘tis but a scratch’. Boom – off goes the other arm, ‘tis just a flesh wound. Bang – legs come off and he goes ‘let’s call it a draw’. I'm sorry but this will not be a draw,” Mr Warnes said.

There is too much at stake in the trade war and ultimately if Trump ever wanted to declare victory it would be in name only said Mr Warnes.

“The Chinese are going to be here for another 10,000 years, they’re in for the long game. These guys do know what they are doing,” he said.

Mr Warnes said looking further forward, China would grow to be a powerhouse economy and the US would be unable to compete.

“I think China has a much better chance of replacing the US market than the US has got of replacing the Chinese market which is the biggest consumer market in the world. Growing at a rate that the Americans can only dream of despite the fact that its slowing,” he said.

Do not fear global politics when investing: Morningstar

A Morningstar executive told the annual Individual Investor Conference that there was not a lot of global events that should concern investors. 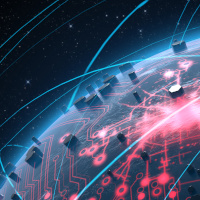