JP Morgan is still the largest custodian in Australia, holding just under $800 billion in assets on behalf of Australian investors.

The Australian Custodial Services Association (ACSA) has released statistics for the six months to 30 June 2018 that show total assets under custody for Australian investors grew by 4 per cent to $3.62 trillion during the period.

While the total amount of custody has grown strongly (see chart, below) the amount of overseas client investment in Australia (assets held in sub-custody) also grew by 4.4 per cent during the first half of 2018 to $1.54 trillion. 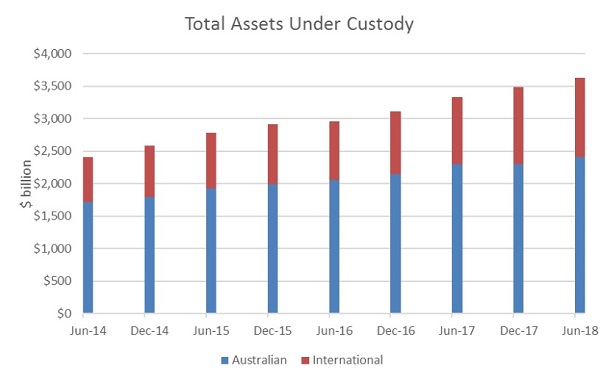 The mix of total assets in international markets has increased from approximately 28 per cent to 34 per cent since June 2014, said ACSA.

“This translates to average annual growth in Australian assets of 9 percent, versus international asset growth of 15 percent over the past four years,” said the association in a statement.

“ACSA also remains focussed on matters closer to home, working with regulators and the broader industry to implement reforms aimed at growing our funds management sector and streamlining operations. An additional focus is the replacement of the ASX equities settlement platform CHESS,” Mr Brown said.

“The replacement of CHESS is a significant initiative by the ASX, and fundamentally important to the industry.

“ACSA is engaged on all aspects of the transition, with a sharp focus on functionality, improved efficiency, features of the underlying technology, systemic impact on the industry operating model and, of course, end client benefits,” Mr Brown said.

JP Morgan is still the largest custodian in Australia, holding just under $800 billion in assets on behalf of Australian investors.