The warning signs are ‘flashing amber’ on a credit crisis in China as the authorities stamp down on excessive lending, says Spectrum Asset Management.

Credit-focused Spectrum Asset Management has issued a note titled Our double Minsky risk that focuses on the likelihood of a credit crisis playing out in China and Australia.

Spectrum principal Damien Wood said both countries have seen a build-up of private debt to record levels: from the business sector in China, and from households (via residential mortgages) in Australia.

The warning sign of a Minsky moment, said Mr Wood, is when the availability of credit starts to shrink.

In China, the government's "well intended" efforts to cut down on excessive corporate leverage are causing the warning lights to 'flash amber' on a Minsky moment, he said.

"One key step was to reduce lending from yield chasing 'shadow' banks. The concerns were that these key providers of speculative lending were an unsustainable source of finance that promoted poor allocation and management of capital."

Shadow banking is falling in China, and the net impact is that overall lending growth is slowing, Mr Wood said.

But if these measures do not work, China could look to socialise credit losses.

"Notwithstanding the steps taken, a key fall-out from the reduction in credit availability can be seen in the Chinese corporate bond market. Bond default rates are accelerating and credit spreads on corporate bonds have jumped," Mr Wood said. 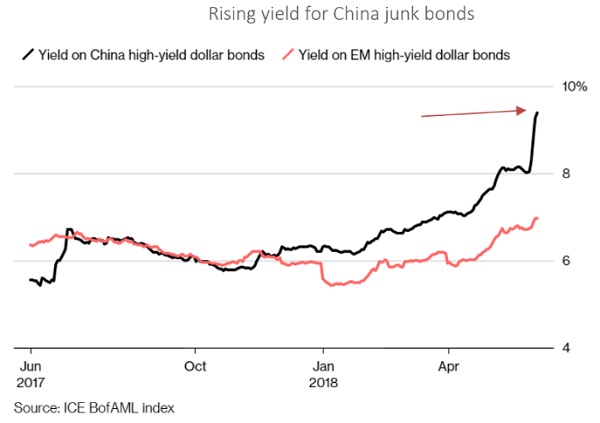 If defaults on Chinese corporate bonds continue (see graph above) a "stampede for the exit could begin", Mr Wood said. "And then we are one step closer to a Minsky moment."

Australia is facing the prospect of its own Minsky moment when it comes to household debt (which is sitting at 120 per cent), where Spectrum rates the warning light flashing 'green to amber'.

"The problem is, even if household debt does not cause excessive problems locally, a rapid deleveraging in China would likely hit local financial markets," said Mr Wood.

"A large debt reduction in China will risk lower than expected demand for our goods from our major export market," he said.

"Conversely, we doubt a domestically-driven downturn locally would raise an eyebrow in China’s financial markets."

The warning signs are ‘flashing amber’ on a credit crisis in China as the authorities stamp down on excessive lending, says Spectrum Asset Management.