The Australian equity market will be a “laggard” compared with other developed countries throughout 2018, predicts UBS.

According to the Australian Equity Strategy Outlook 2018 report, UBS analysts in America, Europe and Asia have forecasted a “bull market” that will “extend through 2018 with another year of above-average returns driven by above-trend EPS growth”.

However, Australia is projected to fall behind developed market counterparts.

“Under this scenario, we continue to see Australia as a laggard (on a local currency basis) though the market appears capable of posting another trend-like return (8-10 per cent),” the report said.

“Once again Australia's key relative headwind is likely to be comparatively sluggish EPS growth relative to what UBS expects to be posted globally and regionally.”

GDP growth in Australia would “do a little better in 2018”, but would not produce “double digit [earnings per share] growth” on par with other regions. 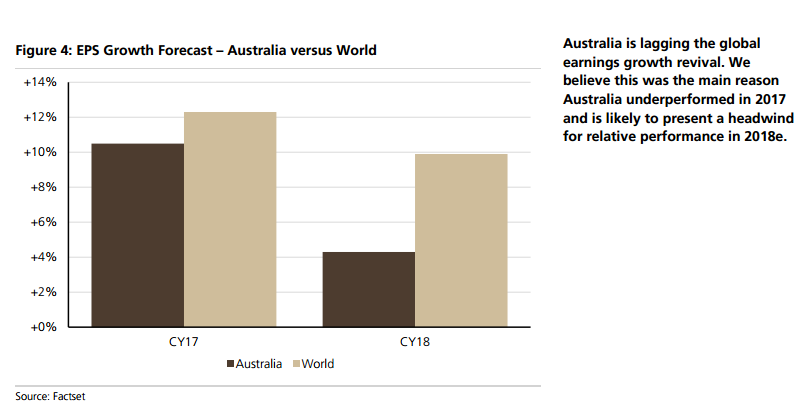 The target market for the conclusion of next year would be 6,275 (compared to 5,946 currently), overweighting resources, other financials and neutral banks, and underweighting REITs and high price earnings areas such as healthcare, online media and “China consumer plays”.

UBS would retain its overweight in the Australian resource sector, but has pulled back on the financial sector.

“Post the recent marginally disappointing bank sector reporting season we have edged our moderate overweight in banks down to neutral,” the report said.

Instead, ‘other financials’ was preferred, “where there is leverage to higher rates and buoyant capital market conditions”.

Confidence in the banking sector had taken a hit from the federal government’s bank levy in the middle of the year, according to the report.

“While policy and regulatory announcements have added volatility this year, from a fundamental perspective the sector has underwhelmed,” it said.

“We were looking for some moderate upside surprise in the recent results season – however results generally proved underwhelming.

“This may be due in part to temporary factors such as soft markets and wealth income, but we were still left uninspired.”