Bitcoin has ‘hallmarks of a classic bubble’

Investors need to safeguard themselves against the “investor psychology” that has contributed to the hype surrounding bitcoin, says AMP Capital.

In the latest note to investors, AMP Capital head of investment strategy and chief economist Shane Oliver warned against the “rollercoaster of investor emotion” that characterised the ballooning interest in the popular cryptocurrency.

“Bitcoin’s price in US dollars has risen exponentially in value in recent times,” he wrote.

In the last five years alone, the price of bitcoin had risen from US$12 to more than US$8,000.

“The enthusiasm about its replacement for paper currency and many other things has seen investors pile in with rapid price gains and increasing media attention reinforcing perceptions that it’s a way to instant riches,” Mr Oliver wrote.

“However, there are serious grounds for caution.”

Bitcoin, according to Mr Oliver, having surged by 760 per cent this year alone, had “all the hallmarks of a classic bubble”. 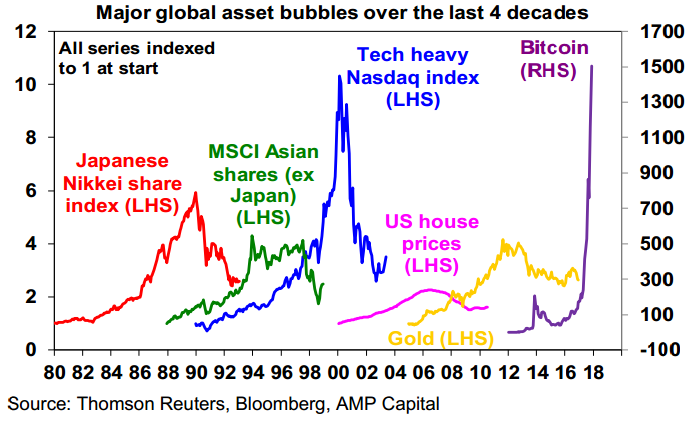 “Because bitcoin is impossible to value, it could keep going up for a long way yet as more gullible investors are sucked in on the belief that they are on the way to unlimited riches and those who don’t believe them just ‘don’t get it’”.

These “gullible investors” suffer from “lapses of logic by individuals and their magnification by crowds”, and experience a “rollercoaster of investor emotion”.

“When times are good, investors move from optimism to excitement, and eventually euphoria as an asset’s price moves higher and higher,” Mr Oliver wrote.

“So by the time the market tops out, investors are maximum bullish and fully invested, often with no one left to buy.” 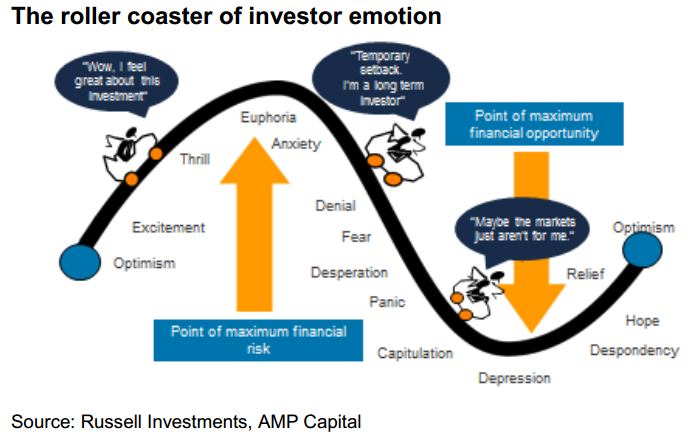 At this point, the scene had been set for prices to drop from “a bit of bad news”.

“By the time the market bottoms out, investors are maximum bearish and out of the market.”

The cycle would then start all over again, Mr Oliver suggested, “[setting] the scene for the market to start rising as it only requires a bit of good news to bring back buying”.

The higher bitcoin climbed, he argued, the greater the fall would be, even though it would not crash the global economy the way the global financial crisis did.

“The risks would grow if more and more ‘investors’ are sucked in – with banks ending up with a heavy exposure if, say, heavy gearing was involved,” Mr Oliver said.

“At this stage, I think it’s unlikely that will occur for the simple reason that being just an alternative currency and means of payment won’t inspire the same level of enthusiasm that, say, tech stocks did in the late 1990s (where there was a real revolution going on).

“That said, it’s dangerous to say it can’t happen.”

Bitcoin has ‘hallmarks of a classic bubble’

Investors need to safeguard themselves against the “investor psychology” that has contributed to the hype surrounding bitcoin, says AMP Capital.