Investors shifting away from hedge funds

More investors are looking to decrease their allocation to hedge funds, with the appetite for non-traditional alternative asset classes starting to grow, according to EY.

According to results from the EY 2017 Global Hedge Fund and Investor Survey, investors have demonstrated unwillingness to increase their target allocation in hedge funds.

Only 11 per cent of investors said they planned to increase allocations to hedge funds in the next three years, compared with 18 per cent last year.

A majority of the remaining respondents (74 per cent) answered they would keep their allocations flat, with the other 15 per cent planning to decrease their allocation, up slightly since last year (13 per cent).

These results were further evidence of an ongoing “trend that has played out for several years”, according to the report.

“This trend is particularly pronounced among North American investors, of which 25 per cent reported expectations of future reductions,” the report said.

“That fact contrasts significantly with non-American investors who remain quite bullish on the industry. 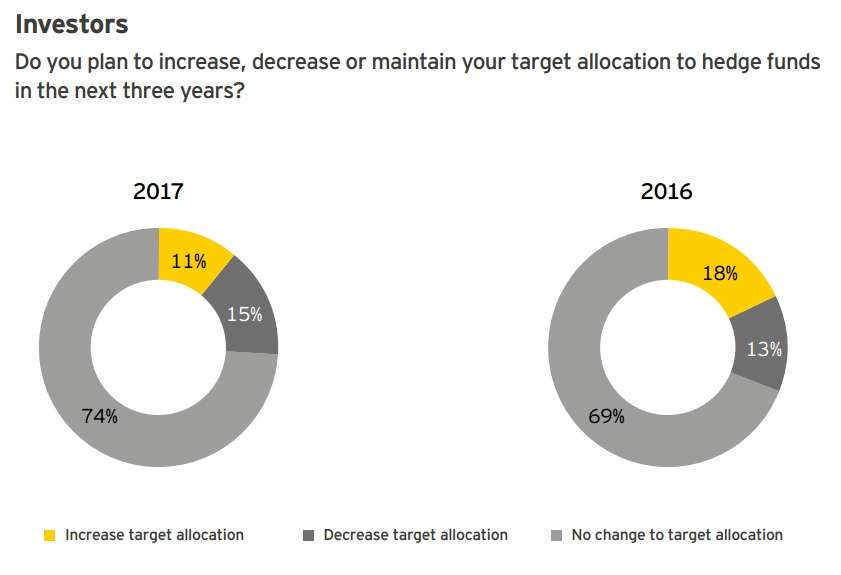 Among the top products or offerings investors were currently or planning to invest in was ‘private equity’ at 76 per cent (compared with 59 per cent in 2016); ‘real assets’ at 66 per cent (up 3 per cent since last year); followed by ‘long-only funds’ at 53 per cent.

“More passive investment options, like ETFs, are taking on a growing share of the traditional asset management space and, at the other end of the spectrum, alternatives such as private equity and venture capital are increasingly attractive to investors.

“However, there are still a lot of opportunities for Australian hedge funds willing to offer tailored products that will provide diversification to traditional portfolios and adapt to the changing preferences of investors.”

“Customised fees, liquidity and reporting have been areas that managers and investors have been aligning for a number of years,” the report said.

“The real area of growth has been in products with customised portfolio exposures.

“The number of investors using these vehicles doubled from 20 per cent last year to 40 per cent this year.”

Investors shifting away from hedge funds

More investors are looking to decrease their allocation to hedge funds, with the appetite for non-traditional alternative asset classes starting to grow, according to EY.