Just because a fund manager has a good track record does not mean it makes sense for investors to buy into their listed investment company, warns Zenith Investment Partners.

In total, $7.4 billion has been raised by listed investment companies and trusts since 2013, Mr Higgins told InvestorDaily.

Most notably, Magellan completed a $1.55 billion capital raising for the Magellan Global Trust at the beginning of October 2017.

There have been 53 capital raisings by LICs in the past five years, of which 38 were by fund managers, Mr Higgins said (see graph below).

Zenith's warning is a simple one: don't get carried away by the "glamour" of how much money is being raised and how good the fund's track record has been.

"We know from past experience that sometimes investors in LICs cannot fully appreciate the different path of returns that you get being a shareholder in a LIC versus a unitholder in an unlisted fund," Mr Higgins said.

He highlighted strategies that are "low beta" (i.e. uncorrelated with indices) such as long/short and market neutral funds.

"In an unlisted fund that's fine, but you kind of question whether or not it's the most efficient thing to do in a LIC when the market can wipe out your objective from being delivered," Mr Higgins said.

"Even if the portfolio manages to do what it's supposed to do, the share price doesn't have to behave like that." 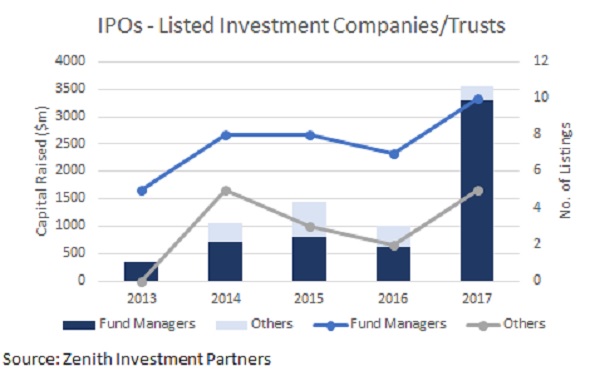 Zenith is also suspicious about the motives of some of the fund managers looking to launch a listed investment company version of their fund.

"We think that there are managers out there who are perhaps opportunistically using the interest in LICs to basically shore up their FUM, because it's captive money," Mr Higgins said.

"If they've not got a lot of FUM in their unlisted business or that FUM is at risk of getting yanked out from under them, sometimes a LIC can look attractive."

Even without the Magellan capital raising earlier this month, fund managers are responsible for the "lion's share" of LIC raisings in Australia, he said.

"It's kind of snowballing. We think you could very well get a scenario where the next time [markets fall] you could get to a Minsky moment with the LICs where people are thinking this is all fantastic and then you get a big correction," Mr Higgins said.

"People could get it really brought home to them how much volatility you can get in these things in terms of trading away from [net asset value]."

Just because a fund manager has a good track record does not mean it makes sense for investors to buy into their listed investment company, warns Zenith Investment Partners.