Within the span of a year, the number of investors ‘highly likely’ to invest in Australia fell from 94 per cent to 70 per cent, according to Perpetual, with political risk identified as the foremost challenge to investment.

Of the 26 domestic and global investors, fund managers, developers and industry professionals who participated in the research report, 62 per cent of investors felt “political risk” to be the ‘most significant challenge to investing in Australian infrastructure’, almost doubling since last year (35 per cent). 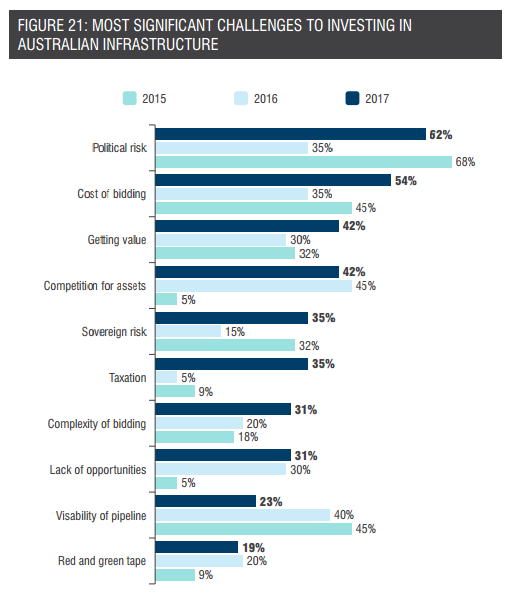 Reflecting on the report findings, IPA chief executive Brendan Lyon said investor sentiment about the infrastructure sector was similar to that typically associated with emerging economies.

“Two-thirds of investors are spooked by the federal government’s unpredictable policies on energy and other market interventions planned or under consideration,” he said.

Mr Lyon pointed to statistics that saw a striking drop in South Australian investment from 75 per cent to 4 per cent.

“Given the increasingly urgent need for major investments in electricity, it’s very worrying three in four investors are badly spooked by energy policy uncertainty,” he said.

“This shows an urgent need for the federal government and Opposition to stop the political games and agree [on] the rules on electricity.”

According to the report, a majority of participants shared similar views of “discordant” state and federal policy and a fast-paced change in “law and practice”.

A number of particular challenges to investing were identified, such as the Commonwealth government’s move to “try to finance infrastructure instead of funding it”, an unclear national energy policy, as well as the review of the stapled structures tax policy.

The cool sentiment overall was an example of investors’ willingness to “punish jurisdictions for poor behaviour”.

However, there were a number of upsides: when asked ‘what makes Australia attractive for infrastructure investments?’, investors felt the most attractive attribute was Australia’s “track record of infrastructure businesses”, which rose to 69 per cent this year from 50 per cent in the year before.

The report also indicated most participants felt Australia’s global standing was better than average or a ‘clear leader’, but that domestic political risk was “eroding” Australia’s value proposition.

“But like any industry, that hard-won reputation will erode if we don’t continue to improve what we do, why we do it, and how we do it.”

Within the span of a year, the number of investors ‘highly likely’ to invest in Australia fell from 94 per cent to 70 per cent, according to Perpetual, with political risk identified as the foremost challenge to investment.