Investors who choose to underweight China and India in their portfolios are likely to underperform over the coming decades, warns Saxo Bank.

The latest Saxo Bank Quarterly Outlook report has projected further growth in China’s “unexpectedly bright” future and outlined the ways in which China will continue to open up.

“Based on China’s 56 per cent urbanisation rate, corresponding to where the US was in 1930, China has many decades of above-average growth ahead of it,” the report said.

“As Chinese capital markets are opened, global investors will be able to participate in what will be the most transformational century as China and also India will regain their former glory in terms of global wealth share.”

Investors were cautioned against underweighting China and India with a warning that those who did would “greatly underperform global equity indices” over the next 50 years.

“The leading Chinese technology companies that should be part of anyone’s portfolio are social media and gaming company Tencent, e-commerce giant Alibaba and search engine group Baidu,” the report stated.

Increasing pressure on the US dollar in the form of the “ongoing rise of China”, tensions surrounding North Korea and the “loosening of the US-Europe transatlantic alliance” meant the world was seeking a replacement.

“Generational geopolitical shifts point to an urgent need to replace the US dollar, the increasingly dysfunctional global reserve currency, with ‘something else’,” the report said.

“As the world’s largest economy and owner of the world’s global reserve currency, the US has, for better or worse, lived beyond its means as it exported currency to the rest of the world in the form of treasury debt.” 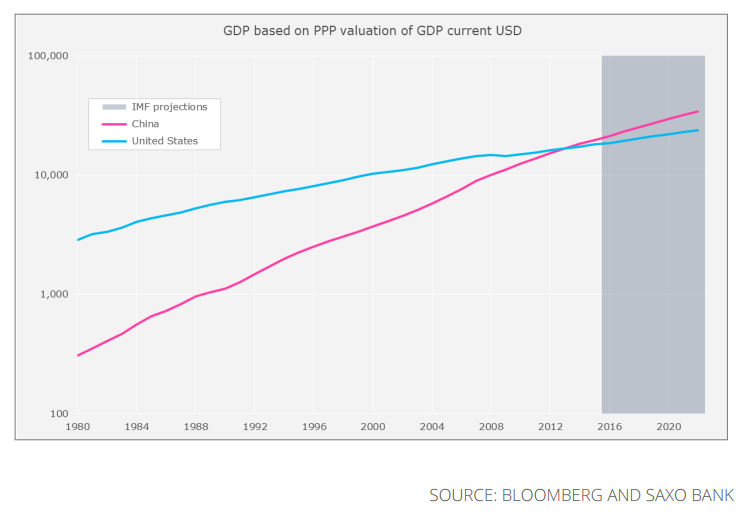 At the same time, China is exploring ways in which it could deepen its capital markets and increase global demand for the renminbi.

“Now, a rising China is eyeing the benefits of having its own currency play a larger role and to supplant the [US dollar’s] role in global trade,” the report said.

China would do this by buying oil in yuan and having trade partners settle in gold, the report signalled, in a move that report co-author and Saxo Bank head of FX strategy John Hardy called “most ingenious” in ensuring “oil-exporting countries will feel comfortable in transacting in yuan”.

“Such a move would aid China’s needed rebalancing away from excessive savings (and therefore investment) and toward more consumption,” Mr Hardy wrote in the report.

Another upside for China would be “to devalue its way out of the excesses of the credit bubble it has so dramatically inﬂated” since the GFC, with China likely to devalue “against commodities like gold and oil rather than other currencies”.

Despite concerns in 2016 and early this year about a slowdown in China’s growth, China has “developed favourably” this year, according to report co-author and Saxo Bank head of fixed income trading Simon Fasdal.

“Chinese inflation and its impact on global inflation are also positive signs that we should not neglect,” Mr Fasdal wrote in the report.

“As a matter of fact, for the time being, everything happening in China is having healthy stabilising impacts on the global economy.”

However, with the 19th National Congress of the Communist Party set to commence in mid-October and Xi Jinping likely to secure a 10-year tenure, the following five years would not be as stable as the last, the report warned.

“If the first five years of Xi’s tenure was characterised by achieving stable economic growth and building his power base, and we assume he will extend his leadership by another 10 years and not five, then we expect the next five years to be more turbulent that the cycle just passed,” it said.

“This will slow Chinese growth more than markets anticipate and have significant consequences for the rest of the world.

“At the end, China will emerge a stable and open global economy with deeply entrenched trading ties both in the East and the West.”

Investors who choose to underweight China and India in their portfolios are likely to underperform over the coming decades, warns Saxo Bank.