In a survey of 8,300 investors across 26 countries, Natixis’ report Trust, Transparency and the Quest for Clarity found investors to be “confused” about the true nature of passive investing.

“More than six in 10 have the misconception that passive investments are less risky when the truth is that they aren’t,” the report said.

“Many investors may have been lulled into a false sense of security and demonstrate unfounded beliefs in the virtue of passive investments.”

According to the report, “unfettered growth” in the decade following the GFC had “masked the inherent risks” of this type of investing.

“By their very nature, passive investments have no built in risk management,” the report stated.

“These investors are missing one key point: passive investments focus on the most liquid securities, which is an unlikely place to find new ‘opportunities’.” 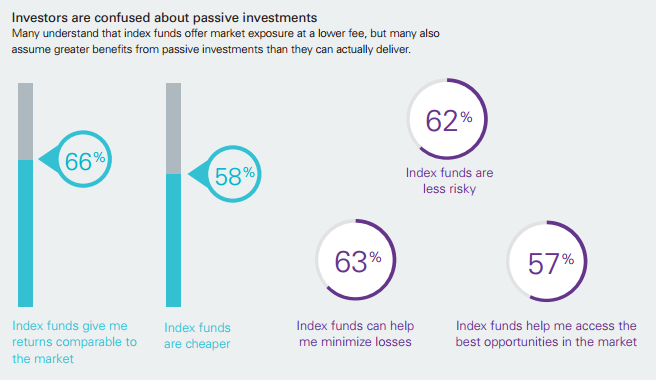 Although 68 per cent of individual investors reported they felt “financially secure”, many still felt “lingering effects” of the GFC that affected how investors perceived risk, volatility and safety.

“A deeper look at sentiment reveals that the scars of the global financial crisis may still run deep,” the report said.

In the same vein, these concerns about risk did not reflect in a diverse portfolio, with only 40 per cent of investors across the globe saying they had invested in alternatives.

“There are some common misconceptions about alternative investments that may inhibit investors from incorporating alternatives in their portfolios,” the report stated.

“In many cases, they may be confusing the broad term ‘alternatives’ with a smaller subset of complex, higher-risk strategies.

“We find that nearly two-thirds of investors believe ‘alternatives’ are riskier than other investments. In truth, this isn’t the case for all alternatives.”

Natixis Australia managing director Kevin Haran indicated that this issue could be one of education.

“Part of the reason may be that, as an industry, we haven’t explained alternatives well,” Mr Haran said.

“There may be some misunderstanding about their role in portfolio construction.

“For example, 70 per cent of Australian investors (compared with 66 per cent globally) think alternatives are riskier than traditional asset classes, and 63 per cent say they are too complicated to invest in.”

More broadly, a disparity existed between expectation of returns versus risk attitudes, the report also revealed.

“Australian investors say that they expect annual returns of 9.6 per cent above inflation, which is a goal that would absolutely push them towards riskier assets, yet 81 per cent said they prefer safety over performance, which does seem like a contradiction,” Mr Haran said.

“On average investors globally believe they will need returns of 9.9 per cent above inflation in order to meet their investment goals, a figure that contrasts greatly with the 5.3 per cent that financial professionals say is more realistic.”