Australia is the second largest player in the Asia-Pacific alternative finance sector, but China is by far the dominant player with over 99 per cent market share, according to a KPMG report.

The report, titled Cultivating Growth: The 2nd Asia Pacific Alternative Finance Industry Report, reveals the total market size of Australia’s alternative financial markets grew more than 50 per cent in 2016, jumping from US$397.61 million in 2015 to US$609.60 million.

Research in the report, jointly conducted by KPMG, Cambridge Centre for Alternative Finance, the Australian Centre for Financial Studies and Tsinghua University Graduate School, surveyed over 600 online alternative finance companies within the Asia-Pacific region and found China continued to dominate the alternative financial market, accounting for 99.2 per cent of total market volume in APAC and 85 per cent of the total global market. 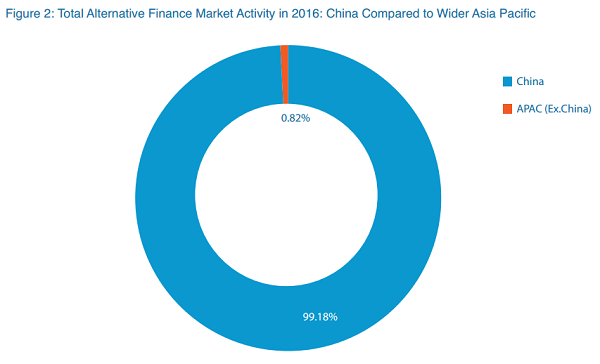 However, 2016 saw Australia overtake Japan as the second largest alternative finance market in the region.

“Online alternative finance has continued to grow rapidly in Australia,” the report said.

“This growth has been substantial when compared with the low base of US$26.69 million reported in 2013.” 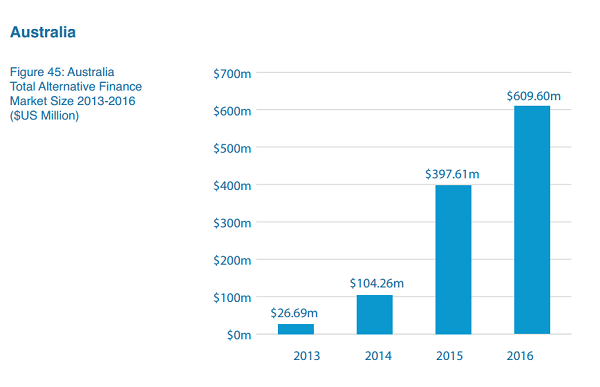 The most popular model of alternative finance in Australia was balance sheet business lending, which accounted for US$217.34 million in market volume in 2016, followed by peer-to-peer (marketplace) consumer lending at US$158.23 million.

Regarding perceptions of ‘existing alternative finance regulation’, 65 per cent of Australian participants felt regulation was “adequate and appropriate”, but when asked to consider proposed regulation, fewer participants (53 per cent) felt the same.

According to the report, the Australian alternative financial market had been “slower to take off than in some other jurisdictions”, pointing to Australia’s resilience during the GFC and “strong retail banking infrastructure”.

“With 99 per cent of Australians having a bank account, there is little concern for issues of financial inclusion,” the report said.

“With the downturn in financial markets, there were some substantial consumer losses, leading to a strengthening in consumer protection around financial services.

“Consequently, the political will to support new digital finance models did not emerge in Australia for some time,” it stated.

The 2014 Financial System Inquiry and Prime Minister Malcolm Turnbull’s innovation agenda in 2015 served as catalysts for momentum in the alternative finance space, the report also said.

“With a highly concentrated banking sector, where the four major banks hold around 80 per cent of retail deposits and supply over 80 per cent of mortgage and business loans, greater emphasis is being place[d] on encouraging competition through supporting digital financial service providers.”

Australia is the second largest player in the Asia-Pacific alternative finance sector, but China is by far the dominant player with over 99 per cent market share, according to a KPMG report.