In the aftermath of last week's 'Brexit', Australian investors with a high exposure to UK and broader European markets could take a hit in the short term, says Morningstar – but they should “remain calm amid the volatility”.

In a report titled Assessing the Exposure to Brexit, Morningstar noted the impact of the UK electorate’s decision to exit the European Union is still affecting markets.

European equities, and particularly UK equities, have recorded significant falls in the past week, said Morningstar.

Morningstar noted that several Australian stocks had “meaningful exposure” to the Brexit backlash, most notably Clydesdale Bank, a regional UK bank spun out from NAB, which is currently listed on the ASX.

Additionally, Wesfarmers, Macquarie Group and Henderson were also listed by the report as having considerable exposure to European market volatility.

Despite this, Morningstar said that investors consider their own exposure and strategy before acting.

“The short-term damage may already be done for some of these portfolios, but that doesn’t necessarily mean changes to your portfolio are in order,” it said.

Many of the portfolios reviewed by Morningstar benefited from good diversification and long-term strategies.

The report added that "a handful of poor-performing stocks or disappointing short-term returns shouldn’t prompt a hasty decision".

Decimal adds to advisory board 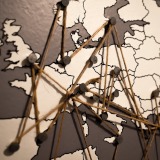