AMP has signalled it will be merging its banking and wealth management businesses into one combined organisation to be named AMP Australia, following the resignation of the company’s bank chief executive Sally Bruce. Mr Finch will be reporting to Mr Wade when Ms Bruce steps down on 1 November.

“The strategy we set out in August is focused on reinventing AMP to be a client-led, simpler and more growth-oriented business,” Mr De Ferrari said.

“Bringing together our bank and wealth management teams in Australia will drive a more integrated organisation better able to pursue the significant opportunity we see in providing more holistic wealth services for our clients.

“Closer integration of the businesses was part of our long-term plan, and with Sally’s decision to step down we have been able to accelerate our internal [reorganisation].”

Ms Bruce has led the banking division for four years.

Mr De Ferrari credited Ms Bruce with delivering double-digit earnings growth through consistently growing revenue and client numbers, as well as creating a “strong and inclusive culture” within the bank.

“I am extremely proud of my time with AMP and what we have delivered at AMP Bank since I joined in 2015,” Ms Bruce said.

“Now is the right time for me to step down and to join my family, who relocated back to Melbourne earlier this year.

“I’m confident I am leaving AMP [bank] in the hands of a strong team who will continue to drive the success of the business under AMP’s new strategy.”

Prior to joining AMP, Mr Wade was most recently head of developed and emerging Asia for Credit Suisse Private Banking.

He was with Credit Suisse for 12 years, six of which he was chief of staff for Asia Pacific.

He also held the roles of deputy market area head for developed Asia from 2014 to 2015 and CEO of Credit Suisse Private Banking Australia from 2016 to 2018.

Further, Mr Finch joined AMP in 2013 after a 12-year career in retail and commercial banking in Australia and the UK.

Prior to joining AMP, Mr Finch was director of strategy and customer value management for Lloyds Banking Group’s retail bank.

He has also held senior roles at Westpac including head of strategy, retail and business banking.

AMP has signalled it will be merging its banking and wealth management businesses into one combined organisation to be named AMP Australia, following the resignation of the company’s bank chief executive Sally Bruce. 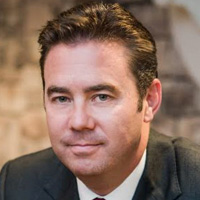