Technological change has left a wake of destruction across manufacturing and retail, decimating storied names such as Nokia, Brooks Brothers, Sears, Debenhams and Toys“R”Us. Advances in technology are now poised to reshape the services sector – with far-reaching consequences for global markets since services represent two-thirds of global GDP and three-quarters of the workforce in developed markets.

But while new technologies – cloud computing, big data analytics, private blockchains, artificial intelligence and machine learning – will have major implications in the service sector, the path of disruption will follow a radically different trajectory from manufacturing and retail. Tech-savvy start-ups will not drive existing incumbents into extinction. Instead, the Goliaths will overpower the Davids: while there will be some notable new entrants, disruption in services will actually increase the dominance of an elite group of existing technology-forward incumbents – a quite different path than the obsolescence and pain seen in other sectors. This is for three primary reasons.

First, large swathes of the services sector suffer from “tech inertia”, particularly areas that are highly regulated like financial services and healthcare. New technologies present immense legal and regulatory challenges that may take many years to resolve. For example, accessing big data creates a host of privacy issues. Machine learning and AI algorithms raise serious concerns around bias. Public blockchains raise significant issues around both environmental impact and regulatory murkiness. In any event, regulators are gradualists by nature, rightly cautious about the risks of new technologies and often requiring time to develop the in-house expertise to fully assess and approve new technologies. At a minimum, heavy regulation makes it difficult for start-ups to enter key parts of the service sector and truly challenge incumbents.

Second, sticky client bases in services makes customer acquisition costs for new entrants prohibitively high. It turns out people are more willing to change their online grocery store than their broker, doctor or local hospital. The breathless hype around robo-advisers, for example, largely petered out when it became evident that potential disruptors such as Personal Capital, Betterment and Nutmeg could not really mount a real challenge to traditional wealth managers without access to scaled distribution networks. Instead, incumbent wealth managers either acquired or built their own hybrid advisory engines.

Third, existing service sector firms have seen the high price of complacency. They have watched a whole generation of retail and manufacturing firms driven out of business by tech-savvy upstarts and are acutely aware of the “adapt or die” imperative that technological innovation presents. Savvy incumbents are already ditching legacy stems, making scaled investments in new technologies, and supplementing in-house development with strategic technology acquisitions. JPMorgan, for example, is experimenting with the private blockchain for clearing and settlement. This cannibalises their heavy investment in legacy systems but sets them up for future success.

So, what does this mean for investors? It is critical they recognise that the technology imperative will barbell the services sector. Of course, disruptive new entrants will still be found in parts of the service sector where regulatory and customer acquisition barriers to entry are less daunting. One example would be consumer digital payment platforms and neobanks accessing previously underbanked customer segments, as epitomised by companies such as Square, AliPay and Mercado Pago. Another example would be in emerging markets like India and Brazil that tend to have larger unbanked and under-serviced populations, and less of a formal, established “bricks-and-mortar” services sector.

But the key takeaway is this: To a far greater extent than in manufacturing and retail, a select group of existing technology-forward services firms will not just survive but actually thrive during the process of creative destruction ahead of us.

Technological change has left a wake of destruction across manufacturing and retail, decimating storied names such as Nokia, Brooks Brothers, Sears, Debenhams and Toys“R”Us. 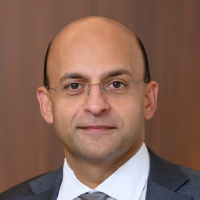