Is the housing market facing headwinds coming into 2022?

The last 12 months have seen unprecedented growth in the housing market. In fact, we have seen the strongest growth in housing market values since the 1980s – with annualised growth at 21 per cent, reaching a peak monthly growth rate of 2.8 per cent in March. This surge was driven by the low-rate environment, high owner occupier demand – particularly first home buyers and new construction, and stock still being slow to come onto the market. New listings have been well below the four preceding years and stock was absorbed as soon as properties hit the market. There was also some COVID-influenced movement out of higher density living towards houses. The rapid rise in prices resulted in owners being reluctant to put their house on the market, fearing they will miss the boat getting back in.

Nationally, the rate of growth across the market has slowed. In September and October, values rose by 1.5 per cent nationally – down from the peak of 2.8 per cent/month. Core logic observed some diversity across the regions with Perth recording its first negative monthly result since June last year, Brisbane being the fastest growing market with housing values up 2.5 per cent in October, followed by Adelaide and Hobart, while the rate of growth in Sydney and Melbourne has more than halved since the highs seen in March 2021, and NSW and Queensland regional markets remained steady around 2 per cent.

However, there are signs that while the overall trend is rising – the pace of growth in the market is easing and facing some headwinds as we move into a new year.

While it is true that investors cooled their heels over the last 12 months with the significant increases in property values, some investors were left wondering if it was too late to get into the market. Investors were wary – as dwelling values rose faster than the growth in rental yields, as population shifts to regional areas created market uncertainty and more renters working from home created demand for lower density housing.

So, while investors have remained somewhat cautious, now as the market settles, there is a looming shortage of stock particularly in regional areas as tenant demand for lifestyle locations increases. And reflective of an increase in investor activity is the increase in investor finance approvals back to 30 per cent of the market – up from 23 per cent in January 2021.

We have a number of investor clients who, over the last 12 months, have been positioning themselves through revaluing their properties and accessing the equity available. They are now ready and getting into the market as the right opportunity comes up – particularly in the regions where there is a shortage in stock and high rental demand – with regional rents increasing 12.5 per cent outside the capital cities with the surge in regional population growth and tenant demand for lifestyle locations.

An opportunity for the astute investor that may emerge in metro markets could be home units. These have become less popular in recent times due to the increase in home-based work, and the general fear of high density living more susceptible to health risk. With the health fear waning, and the house prices likely to push more buyers towards the unit option, this property class may enjoy a delayed increase in values and rental income.

There is no doubt affordability and stock constraints have hit owner-occupiers and credit has become more complex to navigate. The focus when supporting prospective owner occupiers into 2022 will be: 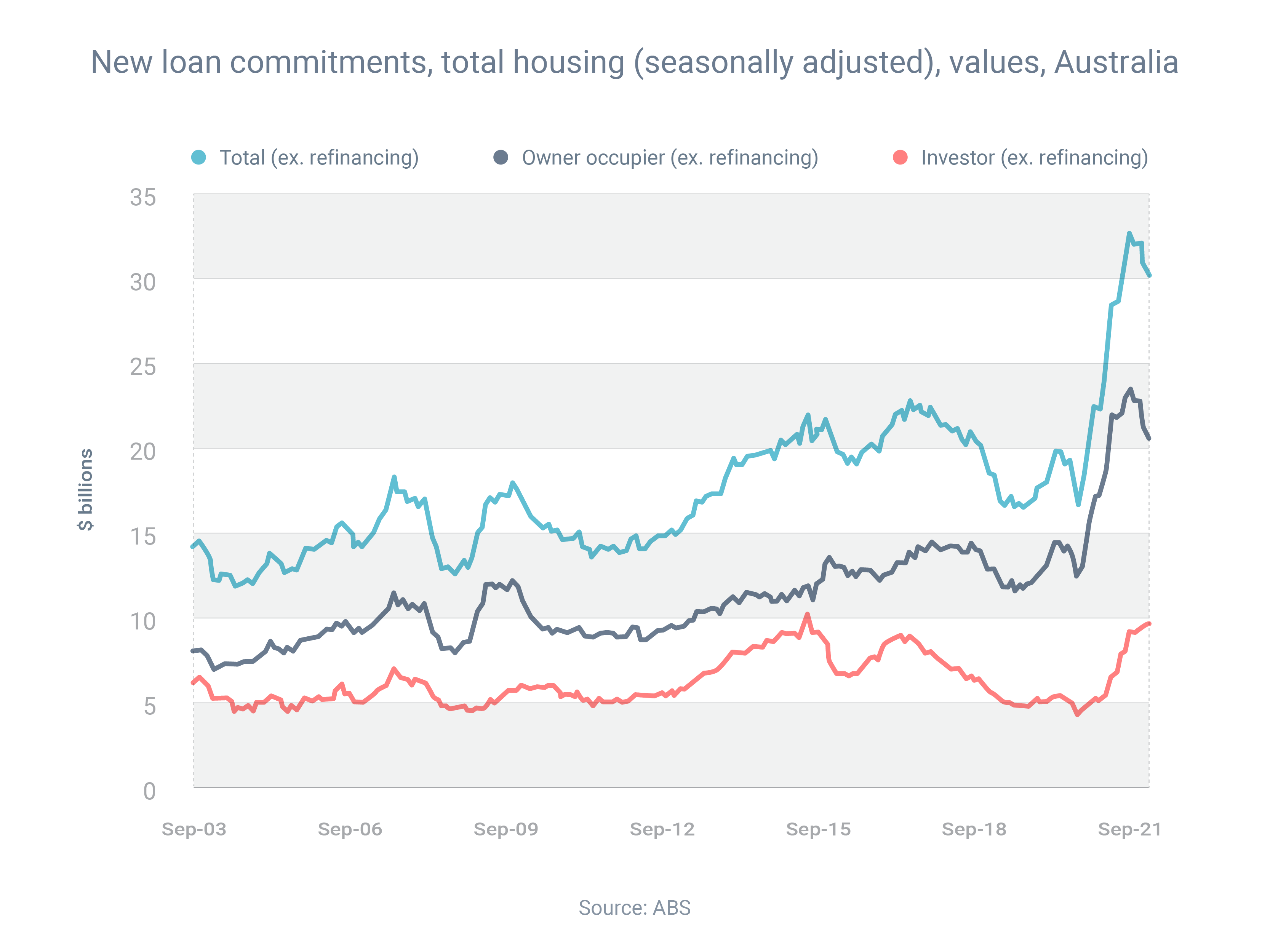 Will we see a more equitable market as we enter 2022?

It appears now that the confluence of the increase in supply coming into the market, affordability constraints, provider rate movements and regulatory intervention impacting access to credit is bringing a calming of the storm, essentially a rebalancing between sellers and buyers ushering in a more equitable and sustainable market as we enter 2022.

With that in mind, we have seen the monthly growth rate in Australian dwelling values slow from a high of 2.80 per cent in March 2021 to 1.50 per cent in October – with ANZ and CBA independently coming out this week forecasting 2022 growth to come back to a rate of 6-8 per cent – down from the 2021 peak of 21 per cent.

This is for general information purposes only and does not constitute advice. With all of these options there are a number of considerations outside the scope of what is covered in this article that you need to understand to ensure your personal circumstances are taken into consideration.

Is the housing market facing headwinds coming into 2022?

The last 12 months have seen unprecedented growth in the housing market. In fact, we have seen the strongest growth in housing market values since the 1980s – with annualised growth at 21 per cent, reaching a peak monthly growth rate of 2.8 per cent in March.