Echoes of debt crises past

While 2020 had many characteristics unique to those living through it, like all human experience, we can find many echoes from the past. In those echoes we may find a guide to human behaviour and reactions that will help guide us through the next phase of the pandemic and its monetary and economic consequences. 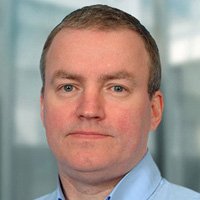 In trying to home in on those echoes from the past I have narrowed my window to the early 20th century: a period where we saw the second-largest pandemic in modern history – the 1918 influenza pandemic (also known as the “Spanish flu”). The aim is not to attempt to draw a road map of the future based on the past, but to remind us that much of what we are witnessing is not new.

Can history help us anticipate what may come next? The period from 1919 to 1923 had many parallels with our recent experience. By looking at what the US and Germany/Austria endured then, the differentiated economic outcomes can perhaps guide our thinking as we look ahead.

The US post-war pandemic period

The deadly influenza variation of 1918 was the most serious epidemic in the history of the US. Hundreds of thousands of people died and millions were infected with the highly contagious variation. At the start of the outbreak, the end of World War I was approaching, and unemployment was at historical lows (about 1.4 per cent). Fast forward to 1920, with the US adjusting to the postwar era, with a material increase in the available labour force, and cities across the country enduring social distancing, quarantine and the shutdown of essential services. Unemployment had risen to 11.7 per cent (by comparison, US unemployment reached 13.3 per cent in May 2020).

Notably, however, the Spanish flu left almost no discernible long-term mark on the aggregate US economy. The timing of the influenza outbreak in the spring of 1918 was certainly a relevant factor. The Dow Jones Industrial Average (Dow) saw a decline of 21.7 per cent in 1917; from this lower base, the stock market consequently recovered substantially into the pandemic, posting double-digit increases in 1918 and 1919. A rise of 30.5 per cent in 1919 remains among the strongest single-year increases for the Dow since 1915 (the highest calendar-year rise was 66.7 per cent in 1931).

When the pandemic unfolded, a significant share of the nation’s resources at home and abroad were devoted to the war economy. Real government spending accounted for about 38 per cent of gross domestic product (GDP) in 1918. The bottomless demand for coal, steel, machinery, textiles and other products needed for the war effort largely offset the effects of such a severe pandemic on aggregate economic activity.

But as troops returned from the war, and with the flu into its fourth wave, a major downturn followed. Christina Romer (UC Berkeley) estimated there to have been a 14.8 per cent decline in the price index between 1920 and 1921.

Parsing the blame between the retooling of the domestic economy and the pandemic is beyond the scope of this article. What is relevant is that the New York Federal Reserve made no accommodation during the recession, increasing rates from 4.75 per cent to 5 per cent in December 1919, followed by 6 per cent in January 1920, and then 7 per cent in June 1920. What perhaps broke the recession and reversed the path of deflation was the flight of capital from Europe, which eased the monetary contraction in the US through its link to gold.

Germany/Austro-Hungary and the ghost of hyperinflation

In Germany and the Austro-Hungarian Empire, the economic impact is even harder to apportion among the consequences of the pandemic, the end of the war and the impact of reparations. The recession in Europe was certainly far more material than in the US. But the consequences were also very different – more long-lasting, both economically and in terms of the societal impact stemming from the consequent period of hyperinflation.

These words on postwar Germany may seem eerily familiar to those who lived through 2020 in the US:

“…the large numbers of unemployed, their passions fermented by the Communists, are seething with discontent … side by side with unprecedented want among the bulk of the population, there is a striking display of luxury among those who are benefiting from the inflation.

“Speculation on the stock exchange has spread to all ranks of the population and shares rise like air balloons to limitless heights … everybody was out to get rich quickly, especially as speculation in currency or shares could palpably yield far greater rewards than labour.”

As exhibit 1 shows (circled) there was very little change to the exchange rate in the immediate postwar period, and even during the initial payments of reparations. It was the subsequent speed of change at the inflection point around early July 1922 that is most shocking. During the period of hyperinflation in Germany in the early 1920s, the number of German marks in circulation increased by a factor of 7.32 × 109. 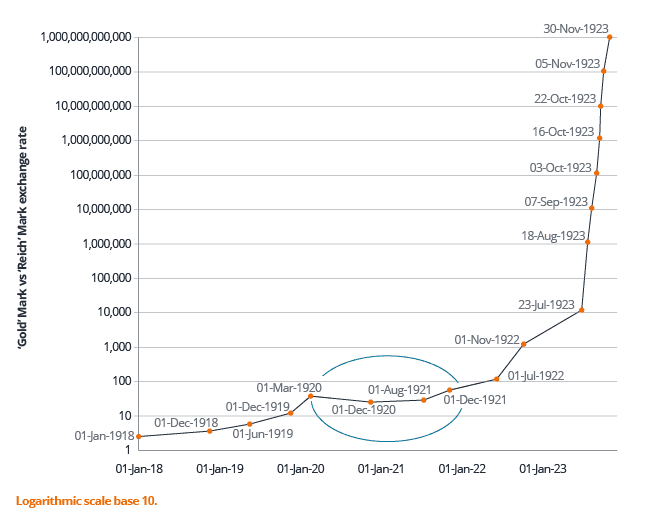 Source: Law about the Revaluation of Mortgages and other Claims (Revaluation Act 1925), issued 16 July 1925 (Aufwertungsgesetz, Reichsgesetzblatt, Teil I, 1925, pages 133-135), plus author’s calculations.

Why was the outcome for the US so comparatively benign?

A recent study suggests that economic policy uncertainty was instrumental in pushing a subset of European countries into hyperinflation shortly after the end of the war. Germany and the collapsing Austro-Hungarian Empire suffered from frequent uncertainty shocks and correspondingly high levels of uncertainty, caused by protracted political negotiations over reparations payments, the apportionment of debt and border disputes.

The German and Austro-Hungarian economies had inevitably been more materially impacted by the cost and duration of the war (the US only joined the war in April 1917) and eventual defeat. The imposition of reparations in the form of gold meant that the external debt burden was immune to any currency devaluation. Germany had opted for the mass printing of banknotes to buy foreign currency, which was then used to pay war reparations, but this strategy contributed to devaluation of the paper mark. Default was ultimately (arguably) the only way to unburden the economy.

“In the whole course of history, no dog has ever run after its own tail with the speed of the Reichsbank.”

It is worth noting that Hungary was so materially impacted by the breakup of its empire (and the battle to apportion debt to the splintered parts) that it was deemed unable to bear the economic impact of postwar reparations.

Despite similar debt levels and loss of productive capacity across these countries it was the heightened levels of economic uncertainty that directly affected inflation dynamics, leading to hyperinflation. Perhaps most predictively, Jose Antonio Lopez and Kris James Mitchener conclude that a financial crisis threatening a country’s ability to repay its debt may quickly become self-fulfilling.

A high debt burden and a weakening external deficit position are by nature inflationary. Debts denominated in a domestic currency, a currency widely disseminated and acting as a reserve currency, and the combination of political and central bank management of a crisis (with a clear path forward), all help dampen uncertainty. It is perhaps that ability to dampen uncertainty that best explains the differential outcome in the 1920s, providing a yardstick for how important government and central bank policy will be to our path out of COVID 19.

Echoes of debt crises past 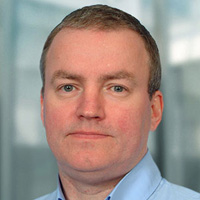