Finding attractive value in one of the world’s biggest companies might seem odd for a pragmatic value investor and to many Microsoft may seem expensive. However, Microsoft’s Q2 2020 earnings again reinforce Antipodes’ view that the tech giant is currently experiencing one of its most rapid periods of growth in its 44-year history, with a long runway ahead. Microsoft’s CEO Satya Nadella reiterated he expects tech spend as a percentage of GDP to double over the next decade and we believe Microsoft will take an outsized share of that growth with its hybrid infrastructure services, platform services and leading SaaS applications.

Whilst group revenue is growing at 15 per cent, earnings are sustainably growing faster than revenue, up 39 per cent YoY for the quarter with operating leverage supported by a very low customer acquisition cost.

Microsoft’s presence across both traditional and emerging developer channels represents a structural advantage versus a competitor set that is hamstrung by a much narrower product offering and costly sales forces. Many so-called “best of breed” SAAS companies that fall in Microsoft’s crosshairs trade on nosebleed valuations.

Microsoft is working to capture a growing share of the customer wallet with its core Office 365 and cloud offerings which penetrate virtually every part of the technology stack whilst simultaneously pushing into new adjacencies like cyber security and edge computing.

The Microsoft Azure cloud service continues to take share from Amazon Web Services with the notable deals for the quarter including the high-profile and topical US$10 billion JEDI contract to supply cloud service to the US Department of Defence and, perhaps as importantly, their partnership with multinational business software group, SAP, means it is likely the vast majority of core enterprise financial data will be hosted inside Azure’s IaaS cloud.

We are also seeing ongoing strengths in their so-called legacy server products business with Microsoft offering a compelling strategy to ensure customers will be cloud ready as they transition workloads to the cloud at their own speed.

Microsoft has been a top 10 position for Antipodes since inception and we continue to think the company is well positioned for unforeseen changes in technology trends going forward.

We believe Microsoft will continue to grow at twice the peer group average – and at the very least believe the company offers investors an “inexpensive” defensive, growth opportunity. 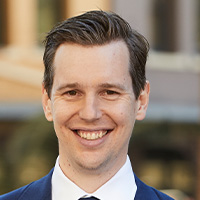