Scott Morrison this week suggested that the government will evolve its climate policy to meet its carbon emissions target. But the PM is clearly hedging his bets. 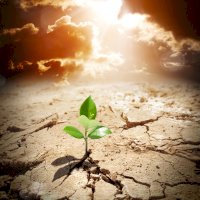 “The cabinet and the government will continue to evolve our policies to meet our targets and to beat them," Mr Morrison said on Sunday.

But here’s the catch: “I want to do that with a balanced policy which recognises Australia’s broader national economic and social interest,” the Prime Minister added.

This sentence perfectly illustrates the disconnect between politicians like ScoMo and the rest of us. People are starting to realise that climate change and environmental concerns aren’t just items on an agenda to be balanced with economic and social concerns. They are fundamental to our existence. The financial and social interests of a nation that fails to take action on climate change are pretty dire.

This summer’s bushfire crisis is the one single environmental disaster that appears to be uniting Australians, forging our various personal beliefs into a singular, dramatic realisation that the planet is in trouble and we need to take action. Even those on the fence about climate change can’t ignore the thick smoke that has blanketed much of the eastern seaboard in recent months.

It is one thing to hear about the bushfires on the news and feel for those directly affected. But the extent of this natural disaster has impacted all of us to varying degrees: the scorched earth, the death of over a billion animals and the toxic fumes that envelope our cities are a daily reminder of the scale of this catastrophe.

Australia has a high standard of living. It’s one of the reasons why population growth through migration is so high (and continues to prop up economic growth). It’s easy to take nature for granted when you have luscious bushland and the Great Barrier Reef in your backyard. But when you’re forced to stay indoors over the summer because the air is so polluted and the ocean has turned black with ash, your quality of life diminishes pretty rapidly and you start to question things.

The 2020 Climate Change Performance Index, released last month, saw Australia receive the lowest rating out of 61 nations for climate policy. The report noted that “the newly elected government has continued to worsen performance at both national and international levels.”

Mr Morrison’s “national economic interest” is the mining industry. It creates jobs and aids the government in its quest for the political holy grail: a balanced budget. Mining delivers 8.5 per cent of Australia’s GDP. Reducing carbon emissions means reducing how much coal we pull out of the earth and burn for energy. This is Australia’s cash cow, and it won’t be disturbed until we can find an adequate replacement. The financial implications are significant.

The Prime Minister could have made a decision on climate change this week. What he really did, though, is hedge his bets to avoid isolating voters. Comments about “evolving” climate policies are welcomed by the inner city environmentalists, while those about Australia’s “economic and social interests” speak to the miners and countless other service providers who need surety that their jobs won’t be impacted.

Climate change is a scientific issue that is increasingly viewed through a political lens. Politics is arguably the largest prohibitor of progression in this country. A forward-looking climate policy must carry over into successive governments if it is to be successful. This would be a great outcome for the people, the nation and the planet. It’s just incompatible with our three-year election cycle.

As Australia burns, the old fossil fuel-powered political machine fails to make any hard turn towards a solution but instead rambles on towards yet another royal commission.