Let’s face it, there are few free lunches in giving investment advice, which makes any reward from reducing a client’s tax burden well worth the effort. 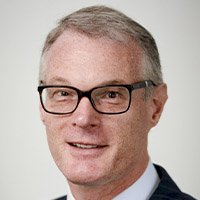 For most advisers, the chance to present a tax-effective investment solution to clients has strong appeal as part of the advice value proposition: the challenge is how do you explain those concepts in a simple way that clients understand.

In this article we’ll take you through three ways in which tax optimisation can benefit your clients.

We’ve designed the examples to apply to clients transitioning into a Ralton Asset Management Separately Managed Account (SMA) such as the Dividend Builder, but the concepts can be applied more broadly. 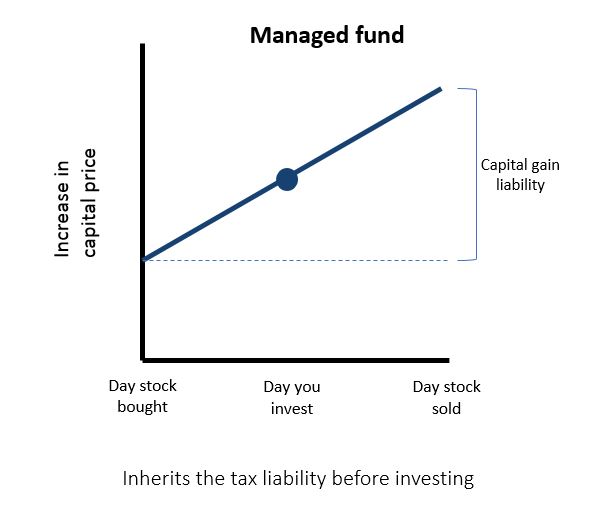 For clients where tax management is a priority, avoiding the inheritance of a capital gains liability is a great first step, because it stops the client taking on a tax burden in the first place.

You can show your client what this means using the chart above. It shows a hypothetical increase in a managed fund’s unit price over a period that begins when a fund manager buys a stock into that fund, and when it sells that same stock. In the middle of that period, the investor buys units in that fund. The price of that unit has inflated since the stock was bought, because it includes the accrued capital gain.

The investor has no choice but to buy into that gain, even though they were never invested during that initial period. They have inherited a capital gain liability. Of course, for the sake of simplicity we have made very simple assumptions, but the concept remains.

For completeness, it should also be noted the opposite is true. If a fund is carrying a capital loss, then the investor can inherit those losses and potentially reduce taxable income – but that is not typically the objective of investing.

In the next chart we’ll compare managed fund example to the Ralton SMA Dividend Builder.

Before explaining this chart, it’s important to highlight that in Ralton’s SMA, the investor has beneficial ownership of shares. And that makes all the difference in terms of what tax burden they are responsible for.

If we assume they invest the same day through the period as the previous example, the capital gain begins from when they invest, and not the start of the period like it was with the fund. That’s because they’re buying shares in their own name through the managed account structure, rather than units in a fund carrying capital gains. They will avoid inheriting a capital gains liability. All other things equal, you would expect their tax burden to be lower.

Second way an SMA is tax-efficient: In specie transfer

Another way to optimise tax for clients is to transfer stock holdings into the SMA via in specie transfer. That will save selling down assets and avoid a capital gains liability even before the new investing takes place.

In the example above, an investor holding ANZ moves their investment into the Ralton Dividend Builder SMA, which also holds ANZ alongside 24 other stocks, such as BHP, WOW and AMC. The key point here is through a transfer, the amount of selling is minimised through the transition into the SMA.

The opposite also works. An investor moving out of an SMA may decide to keep ANZ and sell out of the rest. That may reduce the tax burden on the way out.

Logistically, the “in specie” stock transfer is typically nominated during the platform application process. The adviser will nominate where in specie transfers apply, saving the investor any avoidable capital gains.

And by avoiding the trade, the investor also saves on brokerage costs. It all adds up and gives more of the return to your client.

This is the advantage of having beneficial ownership of shares. The same outcome is generally not possible with managed funds.

As a beneficial owner of stocks, SMAs also allow the client to manage their holdings in a way that optimises their personal tax position. A client can elect to hold or sell parcels of stock depending to benefit their overall tax position. For example, a gain on one parcel may be used to offset a loss on another, and so on. This technique of splicing of individual parcels is generally not available in a managed fund arrangement.

Managed funds have their benefits too

While the examples above highlight some examples of tax advantages of SMA over a managed fund, there are still plenty of reasons a fund arrangement may be suitable for other investors. Managed funds often have the advantage of being able to invest over longer periods, in less liquid stocks, that may provide a higher return potential.

There are also more investment options available in the managed fund space, especially if the investor has a specific portfolio need. For example, advisers seeking a seasoned smaller companies strategy from OC Funds Management, or a low-risk equity income strategy in this part of the cycle could consider the Vertium Equity Income Fund, or even the Chester High Conviction Fund for a highly active Australian equity strategy – these options are not available as SMAs, but as managed funds offered by Copia. 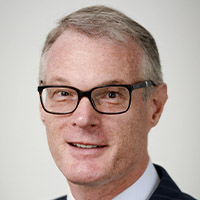