The much-anticipated MSCI China A Share inclusion occurred on 31 May 2018, and so far it has been a pretty smooth implementation, writes Nikko Asset Management's Eng-Teck Tan.

This is the first phase of the implementation and there are expectations that a smooth transition will pave the way for further internationalisation of China’s stock markets.

The total number of China A shares in the MSCI EM Index and broader MSCI AC World Index is within our expectations.

The final figure for the total number of stocks included is 226, lower than the original 234 stocks expected but nonetheless was within expectation.

The implementation of the MSCI A share inclusion is over two phases.

This also increases the overall China weightings in the MSCI Emerging Markets Index from 30.2 per cent to 32.65 per cent.

This will increase further in August – the second phase of implementation.

However, the number of stocks in the MSCI has seen a significant increase from 153 to 447 due to the lower market capitalisation cut off, which means that, potentially, even more A shares could be included in the future.

Taking only into account Northbound flows (for buying into the A shares), the flows increased significantly by more than 73 per cent d-o-d.

It is hard to estimate how much of today’s flows are due to MSCI positioning, as these are not disclosed.

But Hong Kong Stock Exchange data disclosed that an estimated 46.8 per cent of flows were done during the closing auction – the highest on record.

Using the same statistics, then potentially more than $1.5 billion could have come in from passive flows (excluding active flows).

Remember: this is only the first of two phases.

Even with an estimated 46.8 per cent flow potentially being executed in the last 30 minutes of closing, the quota remained well underused – only 7 per cent was utilised.

This could potentially ease one of the two restraining factors that MSCI have mentioned as one of the reasons for the low inclusion factor and weightings.

The smooth trading with low quota usage even towards the closing auction indicates that the concern about accessibility of the market is no longer valid.

Data from the Hong Kong Stock Exchange also indicated significant interest in A shares with trading volume in excess of RMB34.69 billion ($5.7 billion) – the highest on record for the Connect program and the highest since the launch in 2016.

The Hong Kong Stock Exchange has also seen a significant 60 per cent increase in the number of accounts opened compared to March.

It is also clear that foreign investors have been positioning themselves ahead of the MSCI event, due to some attractive long-term structural sectors available only in the Shenzhen and Shanghai stock exchanges.

The Northbound trading volume in the first five months of 2018 is already 190 per cent higher than 2017. 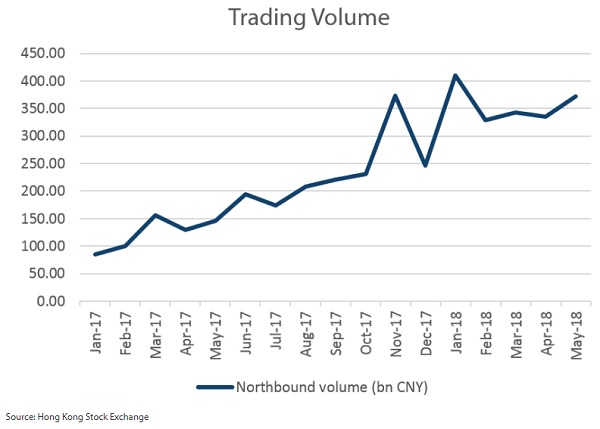 In conclusion, the smooth trading on the MSCI rebalancing of this event will likely prompt a further discussion of the inclusion factor, which is the lowest inclusion factor that MSCI has accorded (ie, 5 per cent).

We maintain our view that this smooth transition will likely prompt a more significant increase in the inclusion factor.

Of more significance to us following the increase of the inclusion factor is the possibility of adding more stocks into the MSCI indices.

Only 226 stocks have been included, but there are more than 3,500 in the two exchanges, and about 1,481 are available on the Connect program, meaning that they can be accessed by international investors.

MSCI has a further MSCI China A International Index which has 422 stocks that could potentially be added to their main indices.

This would significantly increase the size of China A share representations in the MSCI Emerging Markets and MSCI Asia Ex-Japan Index.

If both events do happen, it is not unimaginable that China could potentially account for more than 50 per cent of MSCI Emerging Markets and MSCI Asia Ex-Japan Index in the future.

With this successful implementation, that future might come sooner than we envisioned.