Emerging markets: You won't find this at home

Now could be the time to buy emerging market equities given that valuations, relative to developed markets, are looking compelling, writes Van Eck's Arian Neiron.

Long-term trends favour emerging market economies which are growing faster than those of developed countries, whose economies are more mature. Asset valuations in emerging markets are attractive compared to developed markets, which are around or higher than long-term averages.

The rise of the middle class consumer in China and other populous emerging market nations such as India and Russia, is driving demand for education, entertainment, technology, healthcare and travel.

The Chinese economy continues to do very well and while it may slow down this year, several factors will ensure China’s growth rate remains robust.

The unravelling of the one-child policy is having huge implications for China’s birth rate and economic expansion. With even more mouths to feed in coming years, China’s population of 1.4 billion-plus will consume more resources and also produce more goods to export to the rest of the world.

The lower US dollar this year also benefits emerging markets as it makes their commodities exports cheaper and therefore more attractive. While higher US interest rates may slow down the US and other developed nations, it’s a good sign for emerging markets because it indicates improving global growth.

Taking a closer look at emerging markets, stocks are trading at a significant discount to developed markets. The MSCI Emerging Markets Index estimated price-to-earnings (P/E) ratio is below 15 compared to over 25 for developed markets, as the graph below indicates.

Another important point often overlooked, is that emerging market ‘vulnerability’ is much lower now than it was 20 years ago. When you look at factors such as current account deficits, fiscal deficits and short-term debt, emerging market vulnerability is now at very low levels.

The growth in forward earnings per share (EPS) estimates closely tracks the total global export value and while growth may slow in the second half of 2018, we expect that emerging market will continue to offer better real growth opportunities 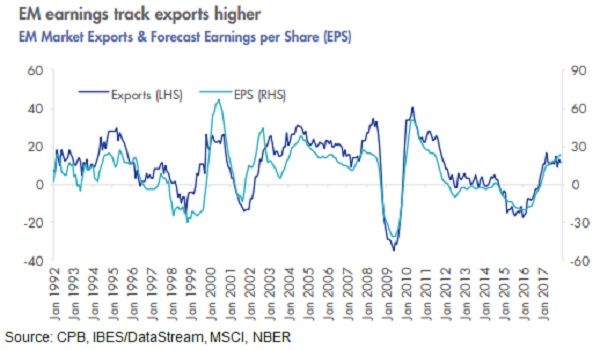 Among listed companies in emerging markets, non-financial sector balance sheets have low levels of leverage. Leverage ratios are approximately half that of developed market companies.

This is positive for equity investors. Less debt means lower interest costs and less vulnerability, especially in an environment of rising interest rates.

Technology securities are important to some nations. For example, in Taiwan technology shares make up almost 60 per cent of the market and in Korea it is almost 40 per cent.

Many of these technology companies are growing quickly given the rapid expansion of the technology sector.

Many people have invested in well-known technology companies such as Apple and Google. However, companies such as Alibaba and Tencent have growth profiles far more appealing than their developed market counterparts, yet many investors don't have exposure to these companies and getting it isn't easy.

Tencent has an astonishing growth rate of 750 per cent in five years, or 53 per cent annualised, and its global presence in social media and advertising is quickly expanding beyond China into the US and Europe.

Korea's Samsung, already a global brand, accounts for many electrical products in many Australian homes, yet is rarely represented in Australian investment portfolios.

Australian equities, which account for a small proportion of global equity markets, are dominated by miners and banks.

Holding emerging market stocks could help insulate investors against a potential slowdown in the Australian economy, which is growing below trend and well below emerging nation growth rates.

Investors keen to diversify their portfolios away from Australian assets will find it hard to resist the lure of these emerging markets.

Arian Neiron is the managing director and head of Asia Pacific at Van Eck.

Emerging markets: You won't find this at home