Investors often underappreciate the contribution that dividends make to the total return of the share market, writes Perennial's Stephen Bruce.

For example, according to RBA data, in February 2018, the average interest rate on a one-year bank term deposit was just 2.2 per cent – the lowest in decades.

Locking up your money for longer is not much more rewarding either, with the return on a three-year term deposit barely higher at 2.5 per cent, and 10-year Australian government bonds offering a paltry 2.7 per cent!

Given inflation is now running at close to 2 per cent, the real return on these cash investments is close to zero.

These numbers highlight a dilemma for investors: keep your money in the safety of term deposits, generating a meagre level of income and seeing inflation erode the value of your capital, or look to the share market, which offers the prospect of higher income generation and long-term capital growth, but also greater short-term risks.

When thinking about both the returns produced by the stock market and the risks that these entail, it is important to look at the role that both dividends and capital growth play.

The contribution dividends make to the total return of the market is often underappreciated.

For example, over the 30 years to 31 December 2017, the All Ordinaries Accumulation Index returned 9.6 per cent per annum.

In other words, dividends accounted for 46 per cent of the total return outcome over that period.

This is even more significant if you also include the benefit investors receive from franking credits, with the dividends paid by the market being, on average, franked to around 75 per cent since franking was introduced in 1987.

Adding franking, the return from dividends has been around 5.9 per cent over this period – more than the capital gains delivered over that period.

So, clearly, dividend-paying shares can be a very effective source of income, with the stock market currently yielding around 5.6 per cent when franking credits are included.

Income that grows over time

Another crucial difference between income generated from shares versus fixed-income investments is that income from dividends can be expected to grow over time, protecting an investor’s returns against inflation.

This can be shown clearly in the following chart, which compares the dividend income from an investment of $10,000 in the All Ordinaries Index compared with term deposits.

The chart shows how, over the long term, the income generated from dividends both grows over time and can dramatically exceed that from term deposits. 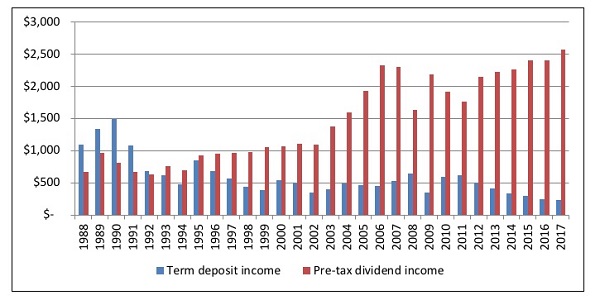 In fact, dividends from the market have grown at a compound rate of 4.7 per cent per annum over this period, while income from term deposits has fallen significantly.

While the above analysis refers to the overall market, the results are even more stark if we compare the income generated from a portfolio comprising high-quality, dividend-paying shares.

But in real terms, due to the effects of inflation, an investment in term deposits lost a significant amount of its value over this time period.

The chart below shows the capital value of a $10,000 investment in the term deposits and the All Ordinaries Index (assuming no reinvestment of dividends):

What about the volatility?

While the value of share market investments have their ups and downs, such as during the GFC, over time there have been far more ups than downs, delivering real gains in wealth.

However, for investors focused on income, it is important to note that the volatility in dividend income generated from the stock market is much lower than that of the underlying share prices.

For example, in 2008 during the GFC, the stock market fell by 43 per cent. However the dividend income generated by the market fell a much lower 29 per cent before bouncing back by 33 per cent in 2009.

The result of this was that the income an investor received in 2009 was only 5 per cent below the 2007 pre-GFC level.

Dividends have continued to grow since, being up another nearly 20 per cent since then. By contrast, term deposit rates were slashed by nearly half from 6.5 per cent in 2008 to 3.6 per cent in 2009.

Unlike dividends which recovered quickly, term deposit rates have continued to decline to their currently low levels.

So for the investor whose primary focus is on income rather than short-term movements in capital value, an investment in the share market may be considerably less risky than they think both in absolute terms and relative to term deposits and fixed income.

Not all shares are equal

While there can be clear attractions to investing in higher-yielding stocks, it is critical to avoid the so called ‘yield traps’.

These are stocks which look attractive on the basis of their high dividend yield, but where underlying problems in the business could exist.

In this sense, the name of the game is sustainability.

In other words, a stock should only really be considered as an investment if its dividend yield is sustainable and able to grow.

Along this vein, it is also critical to focus on what we call ‘true cash yields’.

By this we mean companies which are paying their dividends out of genuine operating cash flow and not using any form of financial engineering to generate distributions.

That’s where active funds management can be so important in ensuring investment in quality stocks with strong balance sheets and reliable earnings that can be used to pay dividends and also to protect the company’s value during hard times.

The global economic outlook is generally positive, with growth improving in most major markets, led by the US, while the domestic economy is sound.

In addition, corporate Australia has been undergoing a period of deleveraging for several years and corporate balance sheets are now in very good shape, further underpinning companies’ ability to maintain or grow dividends.

Longer-term dividend growth should continue in line with economic growth, as it has historically.

The bottom line is that if you want to generate income, high-yielding shares are a very important place to be and cash investments may need to be reconsidered.

Stephen Bruce is a portfolio manager at Perennial Value Management.