Is it time for investors to quit sugar?

By April this year, 31 countries will have imposed a tax on sugar to tackle the worldwide epidemic of obesity – and investors need to start taking notice, writes Stewart Investors' Sujaya Desai.

Australia has the third-highest obesity growth rate, just behind the US and Mexico (see the chart below).

With 63 per cent of Australian adults either overweight or obese, and related health costs coming to $14.6 billion per year to treat diabetes alone, there are renewed calls from medical professionals and health lobby groups for the federal government to follow the lead of countries such as Mexico, where a new sugar tax has seen the consumption of sugar-laden drinks such as Coke fall.

Australians are becoming increasingly aware about making investment choices that align with their beliefs about sustainability.

For clients who have seen similar regulatory changes affect other industries (such as energy and tobacco), a question they might be asking advisers is whether companies with products that are high in sugar are sustainable investments.

Whether it is the introduction of a sugar tax or changing patterns of consumption, these changes pose serious sustainability headwinds for those companies over the long term.

On the other hand, companies that are contributing to and benefiting from sustainable development stand to make positive gains.

Mexico is a useful case study for the case against sugar. In January 2014, the Mexican government implemented a roughly 10 per cent nationwide tax on sugar-sweetened beverages. Since then, the sales of sugary drinks have fallen 5.5 per cent in 2014 and by 9.7 per cent in 2015.

As allocators of clients’ capital around the world, we regularly sit down with the management and investor relations teams of companies.

During a recent trip to Mexico, a meeting with the Mexican division of Walmart (Walmex) brought to the forefront the question of where the companies in our investible universe fit in the shifting nutritional landscape of Mexico – a question we came back to throughout the trip.

“Eighty per cent of Mexico’s population in the top cities is within three kilometres or ten minutes of a Walmex store,” the investor relations representative of Walmex told us. It was a stunning statistic, and summed up the sheer scale of Walmex’s dispersion across the country.

Mexico’s journey along the development trajectory has resulted in a radical change in patterns of food consumption, giving rise to the coexistence of hunger and obesity as two sides of the same coin.

This ‘double burden of malnutrition’ is prevalent in middle-income countries across the globe, influenced by income growth coupled with rapid urbanisation. Particularly in Mexico, the ramifications have been immense.

Roughly a third of the country’s population is now obese, with childhood obesity, in particular, tripling in a decade. The proportion of obese children in the country is now the highest in the world.

The scale of the challenge in Mexico is that of a public health crisis. Obesity, and connected diabetes, take a severe toll on those living with the condition and pose an increasing burden on the healthcare system.

According to the World Health Organization, diabetes is the leading cause of death in Mexico. This is particularly staggering in light of the ubiquitous consumption of carbonated beverages in the country.

In 2012, Coca-Cola reported sales of more than two units of Coke products to every man, woman and child in Mexico, every single day. Further, obesity and related Type 2 diabetes treatments cost the public health system in the country between US$4.3 billion and US$5.4 billion a year. 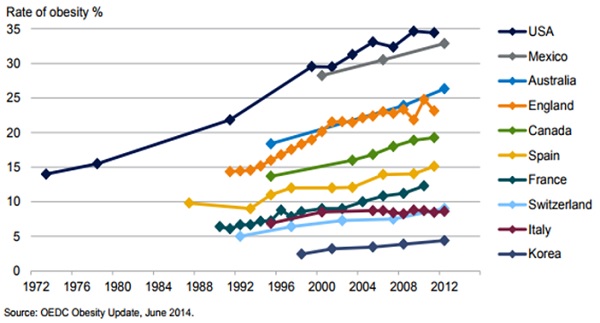 These figures, astonishing as they may seem, closely resemble the growing epidemic of obesity and diabetes in Australia. And while the consumption of Coke hasn’t been rising at the rate of Mexico’s, it’s still high, at one unit every day for every single individual in the country.

Part of the (non-fizzy) solution

An encouraging factor that was evident in our meetings with management on this trip was the unquestionable acknowledgement of the problem at hand, and a clear desire to be a part of the ultimate answer.

To explicitly admit the extent to which malnutrition is pervasive across society is one of the first steps to addressing the sustainability headwinds that it poses. This was particularly evident in our discussions with FEMSA, which owns the OXXO convenience stores and 48 per cent of Coca-Cola FEMSA.

The investor relations manager commented: “We know we are part of the problem, but we also want to be part of the solution.”

Grupo Herdez, our longest-held position in Mexico, is another such example. Their core portfolio has long included healthy staple foods such as canned vegetables and tinned tuna, but they have also recently begun to experiment with new ideas such as frozen yoghurt products that are healthy but also fit local tastes, thereby trying to imagine themselves as more holistic wellness brands.

An almost 10 per cent reduction in sugary beverages could potentially mean tens of thousands of fewer cases of diabetes, strokes, heart attacks and deaths in 10 years, perhaps altering diets especially that of the younger generations, and in turn resulting in healthcare expenditure savings.

No single arm of society or organisation can solely solve a challenge of this scale. The private sector, by virtue of its scope and pervasiveness, has a vital role to play in developing a sustainable solution to the problem of malnutrition.

As such, we continue to aim to allocate clients’ capital to companies that we feel are beginning to realise the necessity improving access to nutritious products, and believe that this is beneficial both for society and long-term investment returns.

Sujaya Desai is part of the investment team at Stewart Investors.

Is it time for investors to quit sugar?