Making the most of shifting global trade

Global trade and commerce is going through rapid change, and investors are seeking answers to how this will influence the investment landscape, write Capital Group’s Rob Lovelace and David Polak.

The contours of international commerce have already undergone a profound transformation over the past two decades.

The 20th century was defined by a phenomenal rise in the transfer of goods and industrial commodities, and the 21st century is being characterised by the rapid digitisation of services and the increasing automation of manufacturing.

It is the advancement in technologies and how they continue to reshape industries that will determine the future of global business as much as current political negotiations.

China’s rise as an economic power and its enormous influence on global growth is another important aspect of the shift in the world order.

The very notion of a global company has evolved over the past two decades.

There are the old-line multinational behemoths dominant in commodities, heavy industrials and consumer products.

But there is also an entire generation of new global companies that have emerged over the past two decades, which are giants in the digital economy.

Alphabet (Google), Amazon and Priceline are among the most prominent examples.

Many parts of the digital economy are not captured in traditional metrics of international trade and gross domestic product growth.

Similarly, many aspects of the digital economy cannot be easily dictated by trade agreements or tariff regimes.

As an indicator of the expansion in this area, cross-border digital traffic has grown 40 times larger since 2007 and is projected to grow by another 13 times in the next seven years.

Digital platforms are also changing the economics of doing business across borders, bringing down the cost of transactions.

Enterprise software solutions and cloud computing are enabling firms to innovate new products and solutions in multiple locations, with faster speed to market.

Small and medium-sized businesses have been able to gain global access by using digital platforms, such as Amazon, eBay, Facebook and Alibaba, to connect with customers and suppliers in other countries.

As their size grows, issues related to digital commerce and intellectual property are gaining prominence in trade agreements.

Similarly, regulators are seeking greater purview over issues of privacy, location of servers and access to online information and services.

These issues will continue to get attention as we see the increasing digitisation of ideas, information and commerce.

Data traffic has been on the rise as digital trade grows 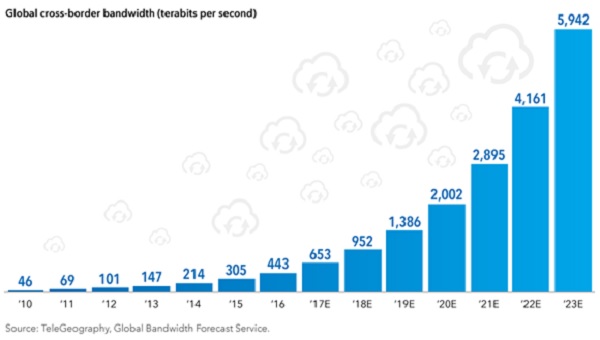 Despite a deceleration in economic growth, China remains the most important driver of revenue and earnings growth for many companies around the world.

Over the past decade, China has also become the largest growth market in the world for a vast array of industries.

It is the fastest growing market for Starbucks, which operates 2,500 stores in the country.

For us to calibrate the success of the global efforts of many companies, understanding their China strategy is critical, and we dedicate substantial resources to that effort, both on the ground in China and around the world.

China has become a major driver of earnings for companies worldwide 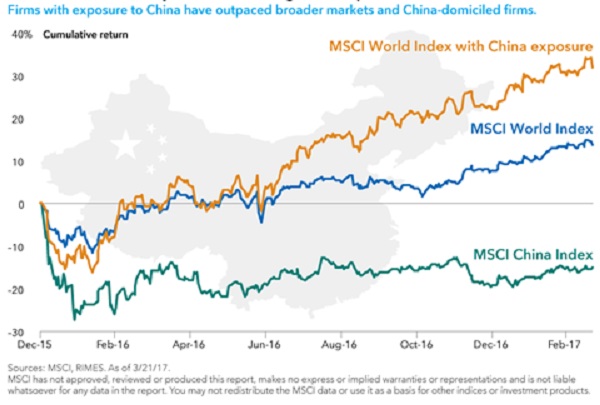 China’s engagement in trade negotiations may also help the central government in its own ambitions to open up its economy.

It could provide China’s leadership with the platform it needs to implement much-needed reforms.

Any negotiations will have multiple layers of relationships to consider, and businesses with interests on both sides are likely to influence new deals.

While the negotiations may be characterised by bouts of potentially unfriendly rhetoric, ultimately, we think any new trade agreements between China and the US are likely to have accommodations for both sides, given the mutual economic and financial dependencies.

The impacts are likely to be company-specific and any investment strategy must be able to address the volatility with a view on the long term.

China’s influence has also led to greater trade by emerging markets among themselves and with developed economies.

With domestic demand rising to become a greater share of total output, we are seeing regional industry leaders emerge in Asia.

Thai Beverage, Lenovo, Larsen & Toubro, Sun Pharmaceuticals and Tencent are a few examples. Many of these companies are less exposed to demand from the US and Europe.

Already, we have seen a recovery in profit growth. Earnings for emerging markets companies are estimated to increase 17 per cent in 2017, led by information technology and industrials, according to consensus estimates compiled by FactSet.

Global commerce has been transformed over the past two decades.

We are likely to see global trade patterns evolve with the increasing digitisation of commerce and the likelihood of new trade, tariff and tax structures in many parts of the world.

Shifts in economic and trade regimes and turning points in markets provide managers like us the opportunity to capitalise on short-term distortions in asset prices and to invest in companies that we view to be winners in the long term.

Of course, not all global companies will thrive in this new environment. Fundamental research will be key.

Rob Lovelace is a vice chairman and portfolio manager at Capital Group, while David Polak is an investment specialist for equities.

Making the most of shifting global trade