Labouring through a soft patch

There is plenty to encourage the Reserve Bank of Australia in the latest labour market figures, writes Janus Henderson’s Frank Uhlenbruch.

Getting a clear read on the underlying pace of growth has been complicated this year by weather events.

The Australian economy grew by only 0.3 per cent in the March quarter, with both dwelling investment and net exports major drags on the growth rate.

While the Reserve Bank of Australia (RBA) has indicated that it will look beyond these disruptions and still expects growth to reach 3 per cent, sluggish labour market conditions led markets to push back monetary policy tightening expectations, with some market participants looking for the RBA to ease further in 2018.

There was a lot to like in the Australian Bureau of Statistics’ (ABS) May labour force data release: 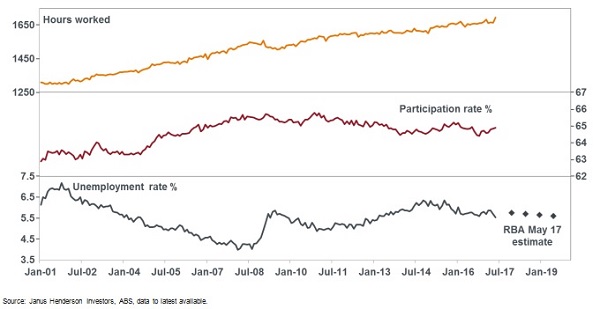 Given the volatility in labour force data, it’s worth taking a step back and smoothing the employment data.

Table 1 shows there has been an improvement in the pace of average monthly jobs from approximately 9,000 per month over 2016 to over 30,000 per month this year.

Importantly, the quality of jobs gain has improved markedly this year, with full time jobs averaging monthly gains of 19,600, compared to falls of around 2,000 per month in 2016.

Another encouraging feature of recent data is that it brings jobs gains more into line with forward indicators and business surveys, and suggests that the economy has maintained underlying momentum despite weather-related volatility in a range of indicators.

The employment index in the May NAB Business Survey is consistent with monthly job gains of approximately 19,000 per month, a high enough rate to push the unemployment rate down further.

Not all beer and skittles

While recent trends have been encouraging, they have only just turned measures of labour market slack.

While the underemployment rate (which captures workers who want more hours) fell from 8.9 per cent to 8.8 per cent, it remains elevated and indicative of ongoing slack in the labour market that will have to be absorbed before the rate of wages growth can lift.

Takeaways for the RBA: steady as she goes

We suspect that the RBA will be encouraged by recent labour market developments and remain reluctant to ease further this cycle on financial stability grounds.

On that front, given their growth and inflation outlook, they can afford to leave the cash rate at 1.5 per cent until at least late 2018, with recent macro-prudential measures and out of cycle lifts in some lending rates ruling out the need for any near-term tightening.

Labouring through a soft patch