The emerging market debt landscape is changing, writes Lazard Asset Management’s Denise Simon – and to succeed, investors need to be both selective and flexible.

Emerging markets debt has been one of the best performing fixed income sectors over the long-term, but more recently the asset class has endured a bumpy ride.

During this market’s golden age – circa 2003 to early 2013 – the stars were aligned for developing countries.

China entered the global economy, commodity prices were on a rising trajectory and the US dollar weakened.

As a result, all emerging markets debt asset classes performed extremely well. This period was followed by a significant re-pricing of risk that began with the 'taper tantrum' in the spring of 2013.

Then following the US presidential election in November, the asset class suffered a short-term setback, driven by rising US Treasury yields and another bout of currency depreciation, although these conditions reversed relatively quickly.

At this juncture, a key consideration for investors is how best to capture the opportunities in both hard and local currency debt amid a new global backdrop and a less homogenous group of countries.

Despite the episodes of turbulence, long-term investors have been rewarded for exposure to the beta, or broad market returns, of emerging markets debt.

However, we believe the asset class is in the early stages of a new phase where performance will be driven more by alpha, or manager skill, than beta.

Emerging markets fundamentals are likely to continue to improve against a backdrop of better growth.

But the variation in the performance of individual countries and currencies is likely to increase as we enter what we believe will be an environment characterised by an ongoing but uneven recovery in emerging markets fundamentals, reflation in the US and tepid growth in the rest of the developed world.

The shifting landscape is likely to have a profound and varied effect on emerging markets economies and investor sentiment, resulting in significant performance dispersion between the so-called winners and losers.

There are clear and sustainable signs of improving emerging markets growth both on an absolute basis and relative to developed markets.

Concurrently, inflation is generally stable in emerging markets, while it is creeping higher in developed markets. Lastly, a number of countries including Argentina and Brazil have seen the political pendulum swing in the opposite direction from many developed countries, moving from populist regimes to more market-friendly governments.

This is positive for investors as market-friendly governments are likely to enact more conservative fiscal policies, which should help to pave the way for increased foreign capital and investment inflows.

Meanwhile, recent developed markets dynamics are likely to weigh on emerging markets debt benchmark returns. A reflationary environment of higher growth and higher inflation in the US is likely to lead to rising interest rates and US dollar strength.

The US is now entering the eighth year of its economic recovery and excess slack in the labor market has largely been absorbed.

We are constructive on emerging markets currencies due to improving growth relative to developed markets and a more favourable environment for commodities.

However, we believe emerging markets currencies are more likely to perform better relative to those currencies linked to the slower-growth regions of the world such as Europe and developed Asia.

The changing landscape is likely to have a varied impact on emerging markets countries and is ripe with opportunity.

Investors with beta exposure are less likely than before to achieve returns consistent with the asset class’ long-term history, however, we believe the alpha opportunity is as compelling as ever because of both top-down macroeconomic themes and idiosyncratic factors (Exhibit 1).

The new era will have more specific winners and losers 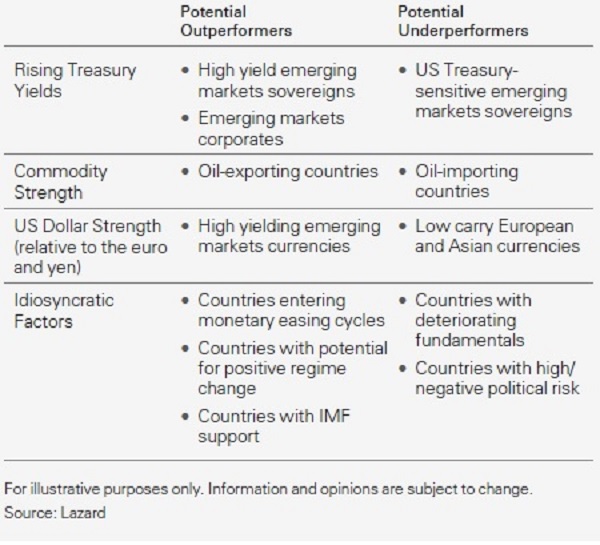 There have been similar periods when emerging markets currencies depreciated versus the US dollar, but performed well against other currencies, thus an investor’s source of funding for long currency positions is critical.

A select number of emerging markets countries are also likely to stand to benefit from positive idiosyncratic factors.

We currently view Brazil as a very attractive opportunity in local debt markets. While nominal yields have declined significantly, real yields are in the mid-single digits and are among the highest in emerging markets.

Elsewhere, regime changes towards more market-friendly governments have been a major source of outperformance, which is uncorrelated to the broader market environment, as evidenced by Argentina in 2015.

With a busy election calendar in 2017 and 2018, we believe this trend will continue. Finally, countries such as Ukraine, Ecuador and Ghana have aid packages in place with the International Monetary Fund (IMF) or are expected to enter into similar agreements.

As we enter a new era where emerging markets debt benchmarks may be challenged by duration, US dollar strength and the significant underperformance of select countries, we believe investors should favor a total return approach to the asset class.

We define a total return strategy as an unconstrained, selective and flexible approach.

A total return strategy is unconstrained in that it considers the entire emerging markets debt universe, including sovereign credit, corporate credit, local rates and local currencies, as well as derivative instruments.

The management team has the flexibility to allocate capital to their “best ideas” and can avoid risks that are not well compensated.

While this approach differs from a pure absolute return strategy, we believe there are benefits for a manager to have the freedom to take directional shorts to hedge at both the overall portfolio level as well as the individual security level in an attempt to isolate the risks that the manager wishes to take.

For example, in the current environment a manager may wish to hedge interest rate risk in order to isolate spread risk. Additional strategies to generate alpha may include relative value positions or the funding of long positions in currencies other than the US dollar.

Importantly, investors must recognise that the benefits of a total return approach come with risk factors that are not associated with a traditional benchmark-driven approach.

In particular, rather than having a more or less static beta to the asset class, the total return manager has the ability to dynamically manage the portfolio’s beta.

While this typically allows for better capital preservation in down markets, the corollary is that the total return manager will typically lag the asset class in a sharp beta rally.

Additionally, the lack of a benchmark and the high conviction nature of this approach means that manager skill is the primary driver of returns. Thus, manager selection is critical to the successful implementation of a total return strategy.

Denise Simon is a portfolio manager and analyst at Lazard Asset Management.