European Union at the crossroads

Despite the election of moderate Emmanuel Macron to the French presidency, the future of the European Union remains in the balance, writes Antipodes Partners deputy portfolio manager Sunny Bangia.

As a monetary union with structurally different economies, the eurozone has often been described as an economic impossibility.

The dilemma of having a monetary union without a fiscal, banking or political union has been horribly exposed in recent years.

Indeed, Macron has said “the EU and the eurozone will not survive long, without further integration. The question is – what is the way forward?”

Investors have become accustomed to believe the EU will either permanently remain an inflexible union or disintegrate.

However, there is a middle ground between what is good for an individual nation and also the region as a whole, where the necessary flexibility is provided by European institutions and common public goods.

Economically, it’s difficult to retain a common currency and a one size fits all monetary policy without allowing regional economies to rebalance via fiscal policy and a banking union to contain deposit outflows in a crisis.

Greece is a great example of this dysfunction. The country’s banks have lost plenty of deposits and, despite the European Central Bank’s emergency liquidity assistance (ELSA), no plan for growth.

Meanwhile, Greece continues to focus on exceeding budget surplus targets even though the economy is burdened by high unemployment.

The million dollar question is: with the election of a moderate French President, will the EU unite to provide fiscal relief to those member states where growth has lagged?

Meanwhile, European economic fundamentals are much stronger than the headlines imply.

Based on a workforce participation measure of employment, the eurozone recovery in employment has been stronger than that of the US.

The data suggests that, in the face of uncertainty, Europeans have deferred consumption resulting in first a catch-up phase, followed by a more durable recovery.

Further, with the euro trading close to its lows on a real effective exchange rate (REER) basis (see chart, below), trade competitiveness is adding fuel to the growth rebound. 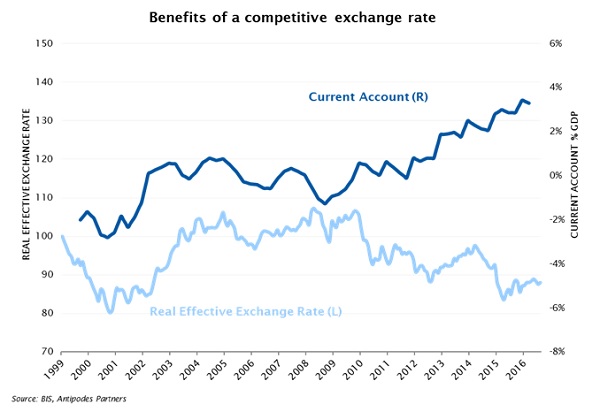 Given the strength of the recovery, the ECB is considering normalising rates even as it keeps up its rate of quantitative easing (that is, reversing the order of tightening that the Federal Reserve adopted).

Why would it do this? Primarily to improve the profitability of the European banking sector, by encouraging lending while also keeping a lid on sovereign yield spreads.

Ironically, according to our heat-map, one of the cheapest sectors globally is European financials, the direct beneficiaries of such a policy.

Antipodes Partners’ portfolio exposures here include ING Groep, Mediobanca, Unicredit and Erste Bank, with each business highly differentiated in its own right. 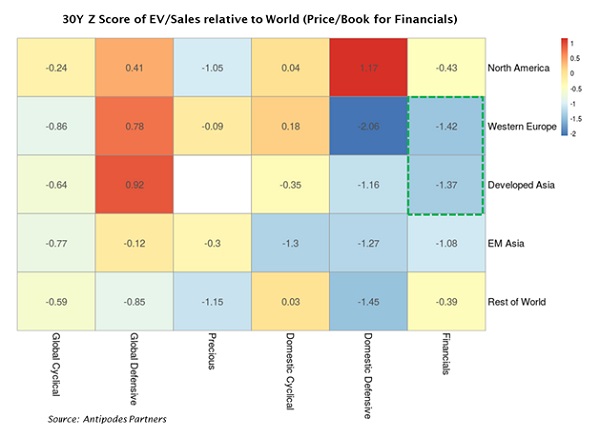 Given Europe’s status as a very large exporter of savings to the rest of the world, the knock-on effects of such a potential policy normalisation should not be underestimated (beyond the potential for the euro to rebound, just a general tightening in global liquidity conditions).

We believe it’s highly likely that both markets are mispriced.

At the core of our investment philosophy, we seek in our long investments both attractively priced businesses (margin of safety) and investment resilience (characterised by multiple ways of winning), with the opposite logic applying to our shorts.

While the investment case will always be predicated on idiosyncratic stock factors such as competitive dynamics, product cycles, management and regulatory outcomes, we seek to amplify the investment case by taking advantage of style biases and macroeconomic risks/opportunities.

Sunny Bangia is the deputy portfolio manager at Antipodes Partners.

European Union at the crossroads