Australian investors have long relied on regular dividends for a reliable source of income, however doubts are increasing as to whether companies can afford to sustain today’s generous payouts and investors should look further afield, writes Columbia Threadneedle’s Jonathan Crown.

Many Australian investors rely on regular dividend payments. Companies that boast consistently impressive dividend yields are often considered to be well-governed, generating consistently strong cashflow and prioritising shareholders, yet some experts are questioning whether Australian companies’ dividend payments are sustainable at their current generous levels.

In the investment manager’s view, Australia’s top companies could be stuck in a dividend spiral.

In May 2015, Morgan Stanley reported that the country’s 200 biggest listed companies were paying out 73 per cent of their earnings as dividends, compared with as little as 50 per cent just five years earlier.

This has since grown and the 10 largest income payers account for approximately 50 per cent of the total ASX income.

Any Australian company that reduces its dividend risks is sending a negative signal to stock market investors.

According to the investment manager, there are also wider concerns about Australia’s economy.

The country’s GDP contracted in the third quarter of 2016 for the first time in five years, prompting widespread speculation as to whether the country could be on track for a recession.

Recent international experience has shown that a recession would hit banks hard, casting doubt on their ability to sustain net interest margins and, consequently, high dividends.

However, it caveats: “While the balance of risks to the growth outlook has improved, there remain significant risks and uncertainties, notably weaker-than-expected domestic consumption, housing-related vulnerabilities, the rise in protectionist policies in the global economy, and a significant slowdown in Australia’s main trading partners.”

While the best income sources in Australia tend to be banks and other large financial players, elsewhere in the world the picture looks more diverse.

In the US and Asia, well-established technology companies are growing fast while offering attractive yields to investors. In fact, technology proved to be one of the strongest sectors for dividend growth in 2016.

From the investment manager’s perspective, investors who restrict their allocation to the domestic equity market are exposed to concentration risk. More than 50 per cent of the S&P/ASX 200 comprises stocks in the financial and resource sectors, and property makes up another significant proportion of securities that regularly pay out high franked dividends.

Even looking outside the main stock market index, the investable pool in Australia is small. Financial, resource and real estate companies still dominate, but there are only 58 stocks within these sectors with market capitalisations of more than $1 billion and dividend yields above 3 per cent.

Of the 22 financial companies, 15 operate in the bank and insurance segments and stand to be directly impacted by a sustained period of low rates. 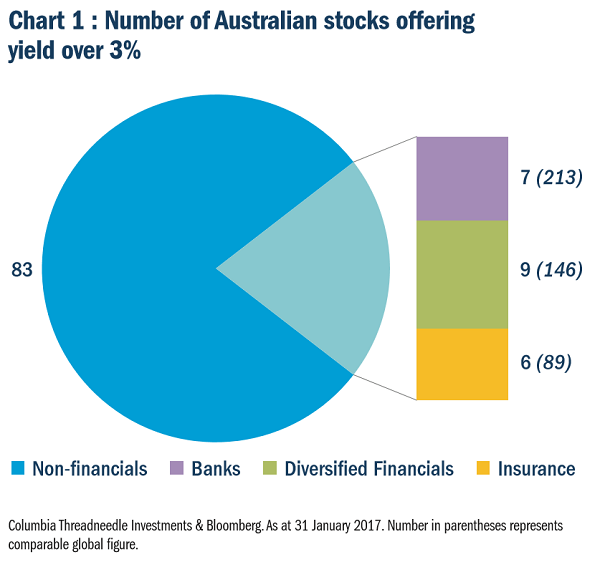 To help avoid becoming heavily exposed to domestic uncertainty, as well as to capture the best possible range of dividend payers from around the world, Australian investors can look further afield.

They can consider investing in a diverse range of international companies to broaden their possible chance of meeting their goals by going global.

The long and winding road

While in the investment manager’s view Australia faces the possibility of entering a recession, other countries are already on the road to recovery.

Although the US is in a state of political uncertainty, its economy appears to be on the uptick, with positive data reported on employment, house prices and growth in manufacturing, among other measures.

The US Federal Reserve has already raised interest rates twice since the 2008 financial crisis, with further rises expected in 2017.

The investment manager sees this upward trend as good news for US-based financial companies such as J.P. Morgan, Wells Fargo and regional bank BB&T, which provide an attractive income to investors.

Other countries and regions also offer attractive options to investors.

In Asia, BOC Hong Kong should benefit from rate rises, due to the fact that the Hong Kong dollar is pegged to the US dollar.

Like Australia, the UK has an established dividend culture and it is possible to uncover strong performers within the wealth management sector.

St James’s Place is a great example of a company with unrivalled distribution in its industry that is taking market share and rewarding investors with a regular and growing dividend.

As well as looking to diversify internationally, Australian investors in search of regular dividends could consider diversifying by sector.

Technology is revolutionising the way we live, yet there are only three Australian technology stocks which historically offer a yield above 3 per cent, with a market cap of over US$1 billion.

Elsewhere in the world, there is a plethora of promising technology stocks spanning hardware, software and services, and semiconductor industries.

While technology is often seen as a risky bet and not typically known as a dividend sector, there are companies which offer reliable and growing income.

For instance, the well-established, US-based IT solutions business Cisco offers a yield of over 3.5 per cent and has just announced an increase in its quarterly dividend.

Another great example is UK price comparison website MoneySuperMarket. The site has been successful at increasing direct to site traffic and reducing its reliance on search engines, thereby boosting margins.

Why now is the time to go global

Australia is a prosperous, young and energetic nation which is rich in natural resources – it is also a country in transition.

People are living longer and pensioners increasingly intend to use their superannuation schemes to fund a more active retirement, thus changing the traditional investment profile.

According to consultant KPMG, using data collected from the Australian Bureau of Statistics, the country is also in the middle of a structural shift towards knowledge-based work such as healthcare, technology and retail.

However, corporate Australia has been slow to innovate.

Most large companies have their roots in the early part of the last century or even the late 19th century. In contrast, many of the US leading companies, such as Apple and Facebook, were founded within the last one or two generations.

Furthermore, international companies come from a range of young and dynamic industries.

New successful companies are likely to surface in Australia, but their early stages will inevitably focus on growth, and dividend payments will be negligible or non-existent.

A diversified global portfolio will give investors access to the very best companies worldwide, which makes both growth and income a priority.

By investing in a carefully curated selection of global companies, Australian investors will have the very best chance of achieving a steady stream of income, whatever the weather.