The establishment strikes back

Although the march of populist politics continues, upcoming political events are unlikely to deliver shocks to investors’ portfolios – but they may create opportunities, writes Insight Investment’s Gareth Colesmith.

For decades, economists and political scientists had believed that democracy, globalisation and multilateralism would serve as society’s end game.

Events such as the ‘Brexit’ vote have made the resulting geopolitical uncertainty a big concern for investors.

The fate of institutions such as the European Union (EU) is now debatable, with potentially opposing outcomes.

Could the EU gravitate towards greater union like the cantons that eventually became Switzerland or hollow out like the Holy Roman Empire into increasingly powerful regions?

Perhaps neither scenario offers obvious action points for investors, as history tells us they can take up to a millennium to play out.

However, a third scenario – a sudden Soviet Union-style collapse – is also possible and would be a big concern for markets.

While the EU can survive the UK leaving, the withdrawal of France or Germany would almost certainly prove fatal.

Pointedly, both nations go the polls this year, in the aftermath of the ‘Trump’ and Brexit votes.

However, this time around, the mainstream establishment parties are almost certain to prevail, possibly fostering closer union within the EU for now.

Can the French National Front win the presidential race?

The now imminent French presidential election has generated much attention this year. Separatist far-right National Front leader Marine Le Pen led the first round polls for much of the period, eventually coming second to secure her place in the run-off.

As key tenets of her campaign involve pulling France out of the EU and the eurozone, her potential victory could spell the end of the union.

However, Le Pen faces an incredibly steep uphill battle in the second round against the centrist independent candidate Emmanuel Macron.

Throughout the campaign, Macron has had a consistent margin of support of around 25 per cent against Le Pen in a one-on-one contest.

Yet polls have come in for much recent criticism – for comparison, the Brexit vote and the US election saw no side averaging a lead of more than 5 per cent.

However, polls may also have been unfairly maligned last year. Clinton did win the popular vote after all and the Brexit vote did swing towards the leave campaign right before the referendum.

Furthermore, the results of the first round of the French election were all within around 1 per cent of what had been indicated by the opinion polls, even though the top four candidates had been separated by only 5 per cent of indicated support.

Figure 1: The National Front has a mountain to climb 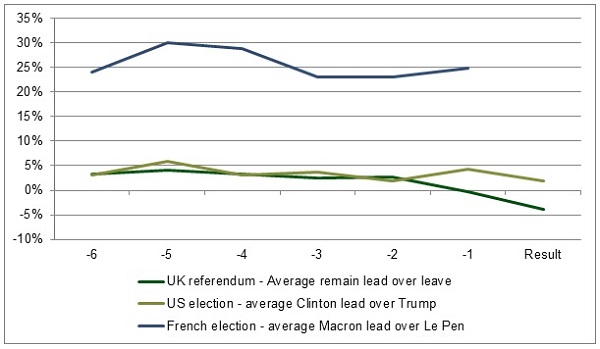 Markets can therefore be highly confident that Macron will prevail, save for a substantial unforeseeable change in circumstance.

Furthermore, his staunch support of pro-European policies and pro-business reforms will likely be warmly greeted by markets, provided he receives a parliamentary majority he can work with.

Is Angela Merkel under threat in Germany?

In this year’s German federal election Angela Merkel is the favourite. Should she fail, there is no credible National Front-style party or coalition in a credible position to take advantage.

The key German populist movement is the Alternative for Germany, a right-of-centre anti-immigration party that for now remains relegated to the fringe.

It received 4.7 per cent of the vote in the 2013 federal election, missing the 5 per cent required to win a Bundestag seat.

Although its support appeared to have doubled earlier this year, the party has suffered a recent decline in the polls and has suffered recent infighting, which has caused leader Frauke Petry to step down after failing to convince the rest of the party to adopt a more moderate approach.

The aftershocks of 2016’s event risks will reverberate

Political risks in 2017 look benign, but uncertainty regarding Brexit, President Donald Trump’s policies and even Italy’s referendum on constitutional reform from 2016 may rumble on.

Not to be left out of the European general election schedule, UK Prime Minister Theresa May has called a snap election that may strengthen her position during and after the scheduled Brexit negotiation period.

Her strong lead in the polls indicates a high level of certainty that her party will win. The development has had a material effect on currency markets but not on fixed income assets, which we believe may remain the case.

A snap election is also possible in Italy, although a general election is scheduled early next year at a time in which the left-wing populist Five Star Movement enjoys a high level of support.

However, its anti-establishment ‘No’ vote in the 2016 referendum on constitutional reform (that claimed the premiership of Matteo Renzi) ironically will leave electoral laws largely in place, making it highly unlikely it will be able to form a government.

In the US, the administration’s market-friendly plans regarding fiscal spending, corporate tax reform and de-regulation may ultimately be balanced against their less market-friendly protectionist initiatives. The order in which these policies are implemented will therefore be important, but at present hard details remain scarce.

Although the coming year’s political events look ultimately benign, political uncertainty will continue to be a theme for years to come, and will inevitably lead to bouts of volatility.

A key example this year so far has been French sovereign debt, which has traded at attractive levels relative to Germany.

Patient and diligent global fixed income investors may be well placed to exploit these events, particularly if they can adopt long and short exposure that draws from top-down and bottom-up insights.

The establishment strikes back