Investors looking to benefit from the election of US President Donald Trump and the effect it’s had on markets will need to adopt a contrarian strategy, according to Peters MacGregor Capital Management’s Nathan Bell.

In contrast to 2016, US investors greeted 2017 full of optimism under a Trump presidency. By reducing corporate regulation, cutting taxes and increasing infrastructure spending, higher employment should pull the economy along and boost share prices.

That’s the theory at least.

Never mind that it might take three or four years before any holes are dug, or that many of Trump’s policies face opposition from within his own party – many don’t want to see America’s huge pile of debt get much bigger.

For anyone looking to profit from Trump’s policies, keep in mind that share prices have already moved to factor them in.

In fact, we enter 2017 with one of the most expensive US stock markets of all time. The chart below shows the median valuation of the stocks in the S&P500 measured by price to revenue, which aims to slice through the numerous ways earnings can be manipulated. 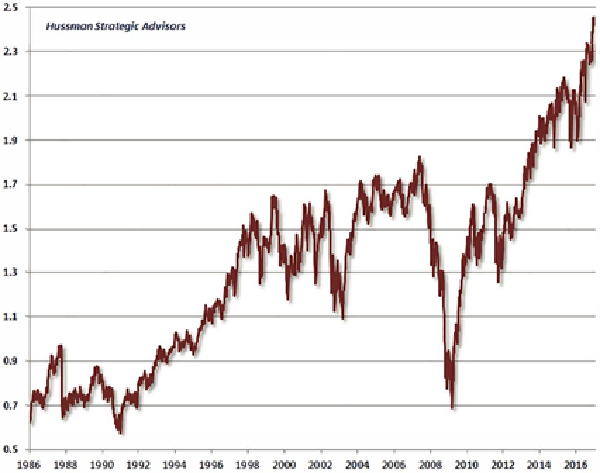 As a side note, it’s been commented that the gap between generally accepted accounting principles (GAAP) earnings and non-GAAP earnings (the manipulated earnings that management likes you to focus on) is at a cyclical high.

This situation might turn you off stocks altogether, but it’s hard to see how anyone is going to live a comfortable retirement investing in alternatives, such as real estate or fixed interest investments, whose prices reflect a 30-year fall in interest rates to virtually zero.

This is a trick that not even the 220 PhDs working at the US Federal Reserve will be able to replicate.

It also spells danger for anyone invested in passive investment strategies based on a broad US index.

Buying an index fund in March 2009 was smart and sensible, as valuations were low and the impact of zero interest rate policies allowed you to triple your money without ever needing to consider what you owned.

Valuations have now reached a point where distinguishing between individual stocks is key to achieving respectable returns.

As is usually the case in the mature stage of a bull market, many investing alumni that focus heavily on risk have underperformed.

Those that pay the least attention often do best, as the most popular names, such as Facebook, Google, Netflix and Amazon, continue to climb as more money from passive index funds and ETFs buy more of the largest and most expensive stocks.

Their combined market value has now reached US$1.4 trillion, so they can absorb large amounts of capital.

They’re also an easy sell to clients, as their share prices keep going up as their revenues increase. This reinforces investor confidence, even if it’s only the tidal wave of money from passive funds driving up their valuations.

The risks of another similar period increase as valuations continue to bake-in more good news. Fortunately, there are simple ways to avoid following the herd and protect your hard-won gains since the GFC.

The simple way is to build a portfolio of unloved and undervalued businesses, though this is not easy, hence why more investors don’t do it.

The low valuations of these businesses are what compensate and protect investors from the numerous risks markets and businesses face in the most competitive world we’ve ever experienced, driven by new technology.

While it’s easy to sell the merits of a rapidly growing, well managed business like Facebook, its virtues are well and truly priced into the stock – not so with Twitter.

If you weren’t aware of Twitter before the US presidential race, then you surely are now.

Provided you don’t use more than 140 characters, Twitter is a social media platform that largely lets you share any thought that crosses your mind with the entire world.

What’s less well known about Twitter is its financial and operating history as a listed company. Twitter has largely been left for dead, down 35 per cent since its initial public offering at $26 on 7 November 2013, and 70 per cent after reaching a high of $70 a month later.

Discussions to sell the company last September amounted to nothing.

Twitter’s problems are many, but despite management’s best efforts, it seems Twitter can’t be killed.

The resilience of a business despite mismanagement is usually a clue that you’ve found a potentially great long-term investment.

The company’s recent belated moves to silence trolls (the name given to people posting hate speech and other degenerate material) should also make it more attractive to advertisers that will continue to switch their marketing budgets away from linear TV, for example.

If the company can deal with its bloated cost structure and increase operating profit margins towards 40 per cent (still well below Facebook’s), the stock would be trading at under 13 times pre-tax income, less than half of what Facebook currently trades on.

A classic case of heads we win, tails we shouldn’t lose too much.

Only time will tell whether management can create the value we see in Twitter, but what we do know from decades of experience is that filling a portfolio with unloved stocks like Twitter will produce respectable returns with less risk.

Right now, it also seems investing with an active manager is about as contrarian as you can get.

Given the market usually does what it can to confound as many investors as possible, this bodes poorly for the future returns of index funds after such a monumental run since 2009.

Nathan Bell is the head of research at Peters MacGregor Capital Management.