Australian investors looking for a stable, reliable source of income have not had to search far.

For nearly 30 years, a generous tax imputation system has passed on franked credits for dividends paid to shareholders in domestic companies, boosting yields to among the highest in the world.

In May last year, Morgan Stanley reported that the country’s 200 biggest listed companies were paying out 73 per cent of their earnings as dividends, compared with as little as 50 per cent five years earlier.

This has since grown and the ten largest income payers account for approximately 50 per cent of the income on the ASX.

Any Australian company that reduces its dividend risks sending a negative signal to stock market investors.

Vulnerabilities have risen in recent years. Weak Chinese demand for commodities continues and banks are struggling with low net-interest margins in a sluggish economy further undermined by high levels of household debt and signs of a property market bubble.

Indeed, during the previous few years, share prices in banks and miners had tumbled from record-highs as lower earnings finally forced company boards to cut their dividends.

Meanwhile, decades of lavish dividend distributions have been at the expense of corporate investment, perhaps limiting the potential for future growth.

So, although Australian investors can be forgiven for assuming a steady, high income flow from familiar home-grown companies, the future is less reassuring.

The relaxed attitude of ‘she’ll be right’ begins to seem complacent rather than phlegmatic.

Australian investors wanting a sustainable source of income throughout retirement should therefore consider diversifying their portfolio away from the concentration risk inherent in the local stock market.

With an uncertain outlook for the domestic economy, a global solution offering both income and growth appears the logical solution.

A badge of quality

Before discussing this further, let’s just remind ourselves of the attractions of equity income investing in general.

Management tend to be confident about their company’s prospects, often maintain a superior investment discipline, and take a steady, long-term approach to capital allocation.

Dividend stocks can provide protection against inflation when global interest rates and bond yields are at record lows and in these volatile market conditions, an attractive dividend can help secure shareholder returns even if share prices come under pressure.

Indeed, since 1995 the highest dividend yielding stocks have outperformed the MSCI AC World Index, producing almost double the return on a cumulative basis, with the compounding effect of dividend reinvestment making a substantial contribution.

However, not all dividend stocks are created equally and a disciplined approach to investing – one that considers both growth and sustainability – is essential.

There are good reasons to be sanguine about Australia’s economy. The country has achieved 25 years without recession, with GDP growth fuelled by global demand for commodities, especially from China.

Economic activity grew at 3.3 per cent in the year to June 2016, according to the Australian Bureau of Statistics, and unemployment, though uneven across states, is only 5.7 per cent.

But, there is also cause for anxiety. The headline GDP figure was given a big boost by government spending on infrastructure projects, while private investment declined, exports are still sliding backwards and debt-burdened households are curbing consumption.

The International Monetary Fund’s latest forecast shows economic growth in Australia staying under 2.5 per cent and below global trends in 2016.

The most significant factor is demand from China, Australia’s biggest export destination, and a country in transition from an investment-driven growth model to one that’s consumption-based.

The clear message is that Australia can no longer depend on Chinese demand: there is a structural shift underway that is likely to cap any cyclical upswing in global commodity prices.

And nor for that matter can it rely on Chinese support for its property market, as President Xi Jinping maintains tight scrutiny of private spending as part of his anti-corruption drive.

In fact, over a 10-year period, most traditional asset classes have lost momentum.

This led the report’s authors to conclude that its findings, combined with a fall in the Aussie dollar and interest rates hitting historic lows, provide overwhelming evidence that investors who continue to rely on the so-called domestic triple treat (Australian shares, currency and residential property) are in for a shock.

Investors who restrict their allocation to the domestic equity market are exposed to concentration risk. More than 50 per cent of the S&P/ASX 200 comprises stocks in the financial and resource sectors, and property makes up another significant proportion of securities that regularly pay out high franked dividends.

The investible pool is also small. There are only 39 financial stocks and 15 material stocks with market capitalisations of more than $1 billion and dividend yields above 3 per cent, compared with a global selection of 818 and 152 respectively.

In addition, there is a flipside to generous dividend ratios. As highlighted by graph 1 below, a payout of 70-80 per cent is well above distribution rates by US, European and Japanese companies, and so retained earnings are correspondingly lower.

There is danger that Australian companies are sacrificing investment in their future in order to satisfy investors’ immediate demands for income.

Not only can a failure to retain part of earnings lead to a failure to reinvest in the business, it means that large dividend payouts may be unsustainable. Future headline dividend yields are more likely to reflect a low share price than a healthy balance sheet. 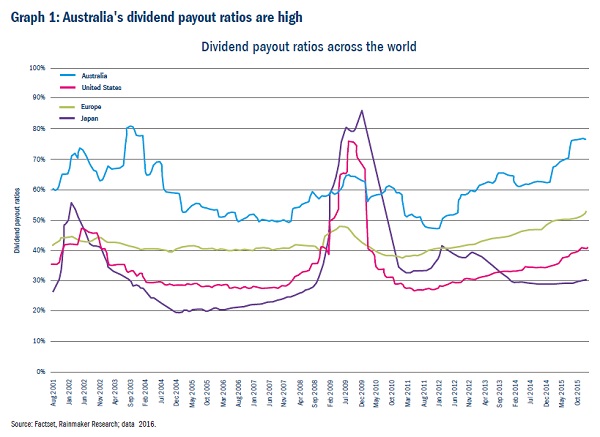 Buying a portfolio of global income shares diversifies Australian investors’ holdings and goes some way to addressing these problems.

It offers exposure to a more diversified source of income, to companies at different points of the business cycle and, importantly, with the exposure to secular growth drivers not present in the domestic market.

Australia is a prosperous, young and energetic nation rich in natural resources. It is also a country in transition.

People are living longer and pensioners increasingly intend to use their superannuation schemes to fund a more active retirement, thus changing the traditional investment profile.

According to KPMG, using data collected from the Australian Bureau of Statistics, the country is also in the middle of a structural shift towards knowledge-based work, such as healthcare, technology and retail.

However, corporate Australia has been slow to innovate. Most large companies have their roots in the early part of the last century or even the late 19th century.

In contrast, many of the US’s leading companies, such as Apple and Facebook, were founded within the last one or two generations. Furthermore, international companies come from a range of young and dynamic industries.

New, successful companies are likely to surface in Australia, but their early stages will inevitably focus on growth and dividend payments will be negligible or non-existent.

While traditional sources of franked dividends from established industries will remain important to investors’ portfolios, a complementary allocation to a diversified global portfolio should lead to a more stable income profile.

Australian investors and their advisers may be nervous about investing internationally, but this shouldn’t be the case. Global equities can provide excellent diversification from Australia’s concentrated equity.