Where to now for iron ore stocks?

The larger iron ore miners are feeling understandably positive, while the base metal miners remain cautious.

Our focus with the iron ore miners was around the sustainability of their operational costs, as well as the impact of changes to WA’s fiscal arrangements proposed by the WA Nationals ahead of the 2017 state election.

The market can sometimes overlook these longer-dated factors, particularly in times of commodity price-driven euphoria, but it is these issues that can impact sustainability and ultimately value.

We clearly need to watch and understand these issues for us to remain true to our investment approach.

Iron ore miners in good spirits, but cautious on growth

Sentiment among the iron ore miners is understandably positive, compared to 12 months ago, given the surprisingly resilient iron ore price over 2016.

That said, the big four miners do appear to be behaving rationally and don’t see the need to push more tonnage, beyond clearly-stated targets, into the stronger-than-expected price environment.

This sentiment was confirmed by Fortescue’s chief executive Nev Power, who believes that the market would not support more tonnes at this stage, despite Fortescue’s supply chain having the capacity to produce beyond its current 165-170 million tonnes per annum (Mtpa) rate (its Port Hedland facility could support rates above 190Mtpa).

Indeed, we found operational management were being encouraged to focus on efficiencies and cost reductions, rather than exceeding volume targets.

New entrant Roy Hill appears constrained at a little beyond its 55Mtpa nameplate, and with Rio Tinto and BHP Billiton both watering down their timelines to achieve previously announced aspirational targets, the consensus view of a substantial deceleration in export growth looks reasonable (see chart 1).

That said, 2017 will see the last of the known major projects to come on line, including Vale’s high-grade low-cost S11D mine in Brazil. 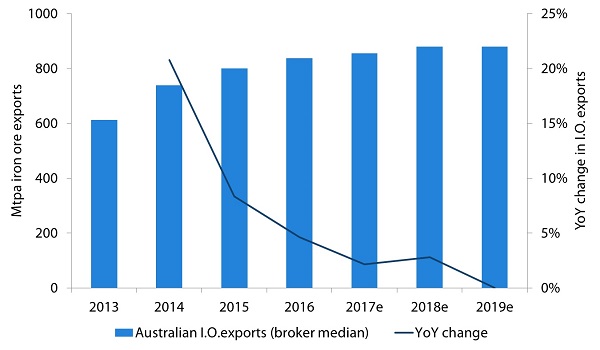 With a focus on efficiency, have we seen the low point for costs?

However, this should be achievable, given its corporate drive for efficiency over tonnage, which includes pursuing automated haulage and processing where possible, combined with a continuation of mine plans that target low-waste areas.

Maintaining this low cost base over the medium-to-long term will be a challenge for Fortescue, given rising strip ratios (waste to ore ratios) and more difficult mining conditions, which are partly a consequence of the cash preservation-mode that Fortescue entered into when iron ore prices reached their 2015 lows.

Capex for the majors looks unsustainable

While BHP Billiton, Rio Tinto and Fortescue have long resource-based mine lives, investment will be required to replace depleted pits with new mines to maintain current production levels, or risk losing market share in the future.

This is something that we feel has not been fully captured by the headline-sustaining capex numbers provided by the companies, and something that the market has a tendency to look through to justify valuations versus share prices, following strong equity market rallies.

For example, Fortescue’s US$2 per tonne does not include the circa US$1.5 billion required to replace its Firetail mine that is due to end by 2021 – capex that equates to an additional US$2 per tonne over the next five years.

Similarly, BHP Billiton’s capex of US$4 per tonne does not include the circa US$3.5 billion needed to replace Yandi by the end of the decade, which equates to another US$3 per tonne.

Rio Tinto also faces a similar dilemma as its Mount Tom Price mine depletes, potentially to be replaced by the Koodaideri mine in the Pilbara.

Ignoring the true sustaining expenses needed by these companies could result in erroneously high valuations.

Looking at consensus expectations for Fortescue (assuming flat output), it appears the market is not factoring in higher capex until 2018-19 (see chart 2). 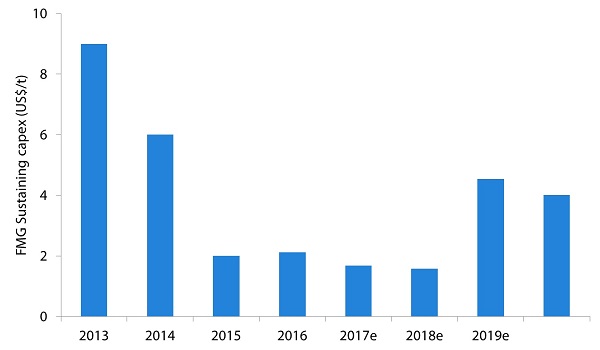 WA Nationals looking to ‘up the rent’

The proposal by WA Nationals leader Brendon Grylls to increase lease rents paid by some iron ore miners has been, and remains to be, a key topic of discussion in Western Australia.

While it would only affect iron ore mines that have been operating for over 15 years, like those owned by BHP Billiton, Rio Tinto and Cliff Natural Resources, it could (or should) have a valuation impact on Fortescue and Roy Hill too, given their multi-decade resource bases.

Looking at Western Australia’s revenues, you do get an understanding of why its politicians are looking for ways to offset falling revenues (see chart 3). Western Australia is being hit by lower royalties from the resource sector, due to falling commodity prices, as well as a decline in GST grants from the Commonwealth.

This is due to the lagged nature of allocating GST revenues, which reflect state circumstances up to three years prior – in Western Australia’s case, a time when commodity prices were much better. 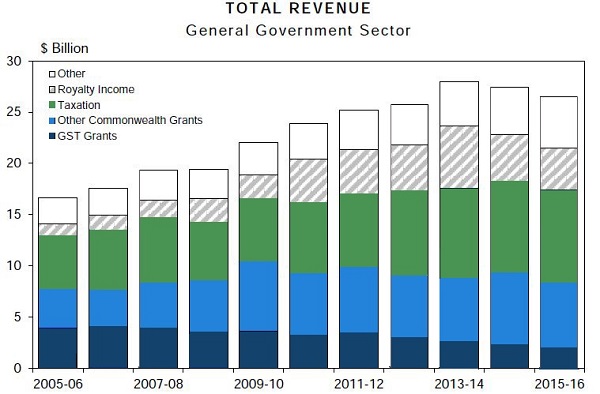 The WA Nationals are proposing to lift rental payments from A$0.25 per tonne to A$5 per tonne, a charge that would be on top of the royalty paid by all iron ore miners.

The rental payment originated in the 1960s, when the government sought to recoup its investment in infrastructure built to support the then-fledgling iron ore industry.

It’s worth noting that at the time, in addition to the rent, an ad valorem royalty rate of 7.5 per cent was included in the first iron ore export agreements, the same rate that is still applied today.

The iron ore miners we talked to while in Perth were obviously against any increase, on the grounds that the royalty they pay is already one of the country’s highest for miners.

They also felt the increased cost would disincentivise future development and place Western Australia at a disadvantage to competitors in other regions.

In addition, the miners pointed out that the rent rise would not solve the state’s key issue around GST grants, given a lift in state revenue would continue to depress the relativity factor that is applied (see chart 4). 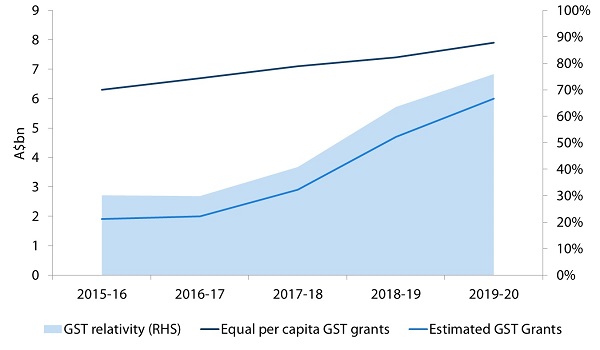 What is the impact?

It’s difficult to know how much validity we should apply to the proposed lift in rental payments, particularly when we look back at the failure of the mineral resource rent tax (MRRT).

With Western Australia’s state election taking place in March 2017, and the WA Minerals Council likely to ramp up lobbying against this proposed increase, this is a key issue for the iron ore industry and one that we will continue to monitor with interest.

Overall, while it is easy to be swept up in the positive momentum currently being enjoyed by the Australian bulk miners, as value investors we need to be comfortable that the longer term dynamics of these businesses are sustainable.

Our trip to Western Australia highlighted key cost factors that we need to watch and factor in appropriately in order to stay true to our investment style.

Where to now for iron ore stocks?