The growing global market for green bonds is creating new opportunities and challenges for investors, writes AllianceBernstein’s Erin Bigley, but investors need to consider whether the bonds they buy are really green.

According to Moody’s Investors Service, third-quarter 2016 was the strongest yet for issuance of green bonds globally, with more than US$26 billion sold.

The credit ratings estimates that total issuance for 2016 could exceed US$80 billion.

That would be about twice the US$42 billion recorded for 2015 (see below) and would continue the steady growth that the market has seen since 2012. 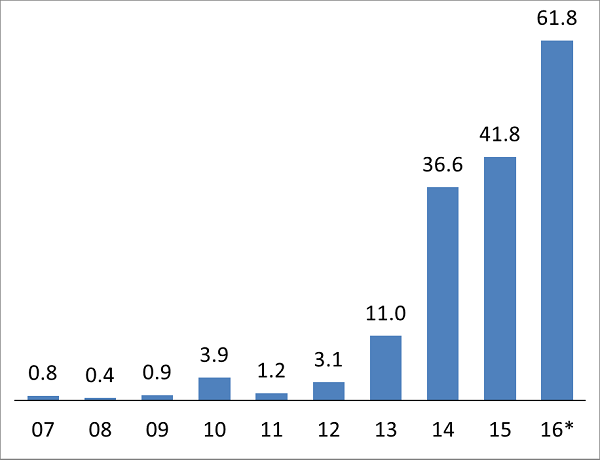 Capitalisation of the global green bond market today is estimated to be well over US$100 billion.

Australia is very much part of the trend. According to the Clean Energy Finance Corporation (CEFC), the green bond market here has grown from nothing three years ago to $1.2 billion last year, with more than 100 institutional investors involved.

This growth trajectory is likely to continue, following the ambitious targets for reducing greenhouse gas emissions set down by the United Nations climate change conference (COP 21) in Paris in December last year.

But what exactly are green bonds, and how can investors determine which ones to buy?

In the US last year, for example, the Massachusetts State College Building Authority (MSCBA) sold what were described as green bonds on behalf of Salem State University near Boston.

Controversially, the proceeds from the issue were to fund a 725-space car park — hardly, on the face of it, an environmentally-friendly development.

According to the MSCBA, however, the project offered a number of environmental benefits, such as electric-car charging stations and the freeing up of land to reduce sprawl and make the campus more pedestrian-friendly, while also creating scope for the construction of new buildings.

Evidently, the “greenness” of green bonds can be a grey area.

In Brazil, the use of green bonds to finance an apparently eco-friendly hydropower plant was questioned when environmental groups claimed that the project could endanger fish species and lead to more deforestation.

In Mexico, the opposite happened when Mexico City Airport Trust successfully financed a new airport using US$2 billion of green bonds.

Airports are usually considered to be carbon-emission hot spots: in this case, however, the new facility is planned to be 100 per cent carbon neutral.

Fortunately, there is some guidance intended to help investors in Australia and elsewhere assess green bonds.

A Diversity of Views

The International Capital Markets Association has developed guiding principles for issuers under four headings: use of proceeds, process for project evaluation and selection, management of proceeds and reporting.

The Climate Bond Initiative (CBI), a not-for-profit organisation, provides certification for green bond issuers based on its own criteria, while the two leading credit ratings agencies — Moody’s and Standard & Poor’s (S&P) — have introduced their own methodologies.

As might be expected, there are differences of approach.

S&P is still developing its approach but proposes that, instead of assessing bonds by how closely they comply with green bond principles, it should focus instead on attempting to evaluate the overall impact of the bond from a ‘green’ perspective.

These differences may confuse as much as help investors, who ultimately must decide for themselves whether a green bond has all the right green credentials as well as credit characteristics.

This means that, when sizing up an offer of green bonds, they need to know what questions to ask.

How to Kick the Tyres

Here are some key things to do when researching a green bond investment, which investors might find helpful:

These are not the only considerations that green-bond investors must wrestle with, others for example are related to portfolio construction and allocation, and how green bonds should be priced, but they are among the most important for anyone entering this increasingly interesting and sophisticated market.