The reform agenda underway in Asia can improve the business environment and may prove conducive for more stable equity markets in the region, writes Lazard Asset Management’s Paul Rogers.

For emerging markets investors, monitoring reform agendas is crucial. While most emerging nations have established world-class companies and deepened their capital markets, many still have basic institutional frameworks and principles that lag significantly when compared to the developed world.

Reforms that effectively address this can be an important driver of future progress in the business environment.

For certain Asian markets, increasing business confidence can be supportive for local equities.

Along with many market observers, we are watching closely for reform developments in China, India and Indonesia, in particular. These are three of the most powerful countries in the region and where some of the most interesting reform agendas are in progress.

Since Prime Minister Narendra Modi was elected two years ago, his government has promoted an ambitious reform agenda (Chart 1). 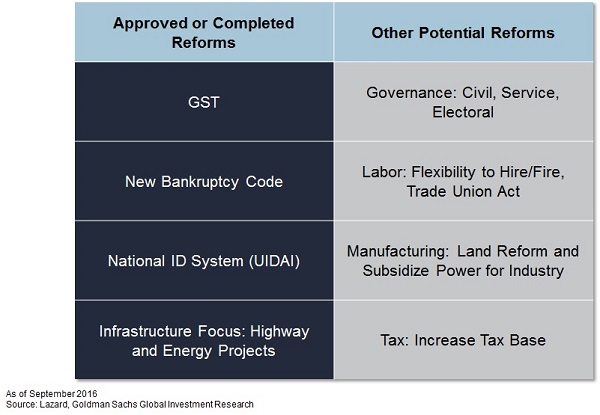 Modi is seeking to improve the ease of doing business in the country and to attract foreign investment.

Infrastructure spending has grown, mainly in the form of highway construction and the 1500 kilometer-long dedicated freight corridor.

However, acquiring land for infrastructure development is critical and the government has reversed course on measures that would simplify the land acquisition process in light of India’s complex system.

A single GST has been approved and is expected to replace a complex multi-layered taxation system which combined about fifteen types of taxes.

The GST seeks to tax goods and services at the point of consumption rather than production, and is aimed at simplifying trade between states - potentially boosting manufacturing.

The government intends to implement the tax in April 2017, but it is still deciding on the tax rate, and current proposals are in the higher end of comparable tax rates across other emerging markets countries.

While the short-term growth impact may be negligible, we would expect the medium- to long-term impact to be positive due to the better allocation of capital, as well as the improving efficiency of domestic production and exports.

Mr Widodo is regaining the confidence of the market after reforming the country’s fiscal budget with big cuts to Indonesia’s fuel subsidies (20 per cent of government spending in 2014), largely to finance infrastructure projects.

There has been a notable policy shift as well with the government promoting a pro-business climate, which is particularly important for Indonesia, a resources-driven economy that has been affected by the commodity price slump in recent years.

Indonesia suffers from an underdeveloped infrastructure network, but up until now, spending was not meaningful.

Today, there are thirty key projects in the pipeline over the next four years spanning several sectors: energy, water and sanitation, and transportation.

Encouragingly, energy subsidies are gradually being phased out (Chart 2) and have been replaced by more productive infrastructure spending, which is expected to grow over the next five years at a rate of approximately $90–$100 billion per year.

Exhibit 2 – Energy subsidies are gradually being phased out in Indonesia 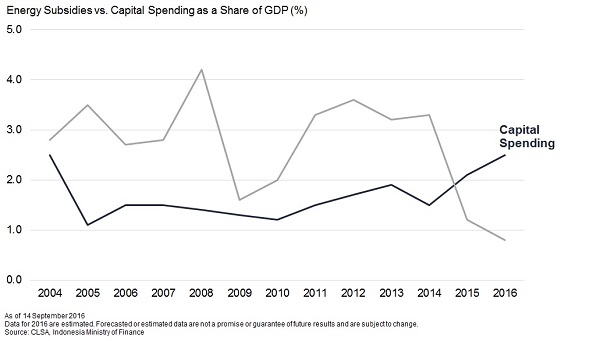 However, given the substantial capital requirements, we think private sector involvement and investment will be crucial for the success of these large-scale programs.

Despite being ‘in construction’ for the past thirty years, the key project of the Trans-Java toll road network has doubled in length in two years to 320 kilometers and is estimated to be completed by 2019.

As one of the world’s largest economies, many observers have focused on China’s transition from investment toward consumption/services as the driver of economic growth.

This transition is likely to be a gradual, multi-year process, but nonetheless will remain one of the central topics for emerging markets and global investors.

To ease or speed up this transition, there are some areas of reform that we believe are likely to be crucial, including financial reform that addresses access to capital markets, state-owned enterprise (SOE) reform to tackle some inefficiencies in these companies and their dominance in key sectors, and anti-corruption campaigns aimed at austerity and curbing bribes to the government.

Over the past ten years, the composition of China’s growth has changed, and there is a noticeable shift toward a services-led economy (Chart 3). 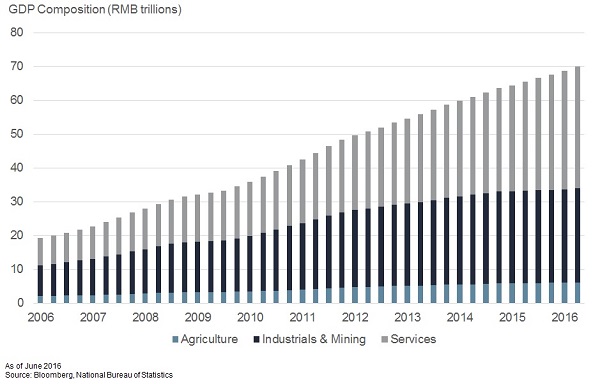 Over this time, the mix of top exports in China has also shifted from items such as clothing and apparel and toys in the mid-1990s to higher-value items,  such as telecom equipment.

Leading “new economy” indicators and rebalancing through the lens of the Keqiang Index, the three indicators preferred by Premier Li Keqiang - railway freight volume, electricity consumption and bank lending - all point to a likely growth slowdown in China, however it is important to look at these components in more detail.

While railway freight volume has been on a decline since 2013, railway passenger traffic has greatly picked up.

Similarly, electricity consumption in the tertiary industry (services sector) and households has outpaced that of the primary (agriculture) and secondary (construction and manufacturing) industries.

Lastly, while bank lending has sharply declined since 2014-15, the capital markets have taken on an increasingly greater role in providing credit flows to the economy.

Overall, there is some indication of China’s successful economic transition, however the complexity that lies ahead should be met with adequate reforms in many aspects of China’s economy and markets.

Although quantifying the effects of structural reform in Asia is challenging, especially in the short term, in the long term reforms should lead to an improved business environment.

A more favorable business confidence can be supportive for local equities and more stability for long-term allocations.

Paul Rogers is a portfolio manager/analyst at Lazard Asset Management.