March madness is coming. For Americans this may conjure up images of watching multiple college basketball games at once on CBS.

However, for those in the financial world, March madness more likely refers to the plethora of central bank meetings that are to take place in the coming weeks.

The madness is not the schedule, but the expectations for the world’s leading central bankers to step further into the unknown and push deposit rates deeper into negative territory.

Expectations are rising on what will be delivered and how it will be reflected in global bond markets. For the first time, the Bank of Japan (BOJ) sold government bonds with a maturity of 10 years with a negative yield.

This means the purchaser of those bonds was willing to pay the Japanese government for the privilege of lending them money for the next decade.

A step that seemingly goes against the term ‘fixed interest’.

Investors usually hold the safest assets of government bonds to avoid making a loss, but in the world of negative yields they are guaranteeing a loss if held until maturity.

The more likely scenario is that Japanese bonds are being purchased at extremely high prices and a negative yield with the expectation of selling them to the BOJ as part of the quantitative easing programs for an even higher price and lower yield.

This is something that is already happening across Europe thanks to the European Central Bank’s (ECB's) move to negative deposit rates in 2015.

Yields are negative on sovereign debt out to maturity of six and eight years for France and Germany respectively.

However, we’ve experienced this before. When the ECB started its quantitative easing program in March 2015, bond markets got a little ahead of themselves and the yield on the 10-year German bund increased by a factor of 10 (albeit from a very low base and the move in yields was from 0.05 per cent  to 0.59 per cent) in just a few weeks.

The result was a painful move in prices.

A further push into negative territory for interest rates means the current income conundrum that investors face will only become worse.

The move towards ultra-low interest rates and now negative rates means that nearly two thirds of the world’s government bonds offer a yield of less than 1 per cent  and over a quarter offer a yield below zero. 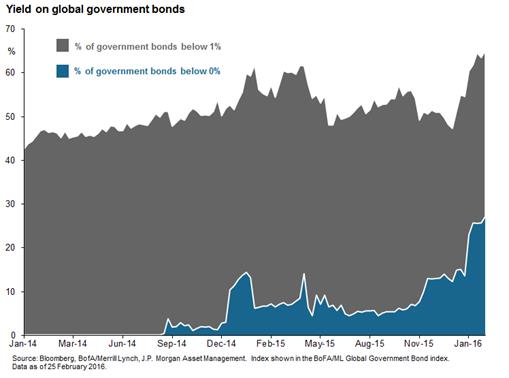 Looking further out on the credit spectrum will provide a higher level of income but comes with its own risks.

Those risks, however, may be lower than the commensurate reward and the sell-off in the high yield debt market has brought down valuations and created selective opportunities outside of the energy and mining sectors in the US.

Meanwhile, the European high yield market is benefiting from the strength of the domestic economy and doesn’t have the same worries over energy given its very small weighting towards this sector (less than 1 per cent ).

In the same way that investors diversify across asset classes to provide stability to returns and reduce volatility, they should diversify across fixed interest assets when looking for income.