Global small caps have often flown under the radar in recent years, but they could be useful for investors looking to better diversify their domestic equity exposure, says Lazard Asset Management's Edward Rosenfeld.

The phenomenon of retail investors concentrating on home markets is not peculiar to Australia – it’s common to most western economies. It’s a natural bias.

The domestic market, in whatever country you happen to live, is likely to be what’s best known to investors, and it’s nearly always the most convenient and least complicated to access.

In Australia, this natural bias is more acute than in markets such as the US or UK, as the Australian equity market represents such a small fraction of global markets – less than 3 per cent (MSCI, 31 December 2015).

In addition, the lack of international diversity is compounded by the S&P/ASX 200 concentration in one industry – banks.

If you are investing in a strategy that closely tracks this index, clearly you are very exposed to a downturn in the banking sector.

It is true that the local index has served many investors well through Australia’s prolonged period of economic expansion, but some cracks have started to appear. The Australian economy is slowing and now may be an opportune time to look abroad for diversification and growth opportunities.

We believe global small caps can offer both growth potential and diversification.

The investable universe for global small caps is currently composed of a much higher weighting of cyclical categories, such as the consumer discretionary, industrials, and information technology sectors. In many cases the revenues of these small-cap companies are less likely to be exposed to any downturn in the Australian economy.

The opportunity set for global small caps is vast, with an investment universe of around 5,000 companies.

This is around three times the size of the global large cap universe. We define global small caps as being companies with market capitalisations generally between US$300 million and US$5 billion.

Small caps in this market cap range can be substantial businesses, with genuine business models and operating environments.

Figure 1 shows that on a rolling five-year annualised basis, small caps have outperformed large caps 95 per cent of the time.

This period of outperformance is consistent with the findings of longer-term academic studies.

In their seminal paper, Professors Fama and French concluded the outperformance of small caps over large caps was due to an element of risk unique to small caps (ie, investors are compensated for undertaking additional risk). 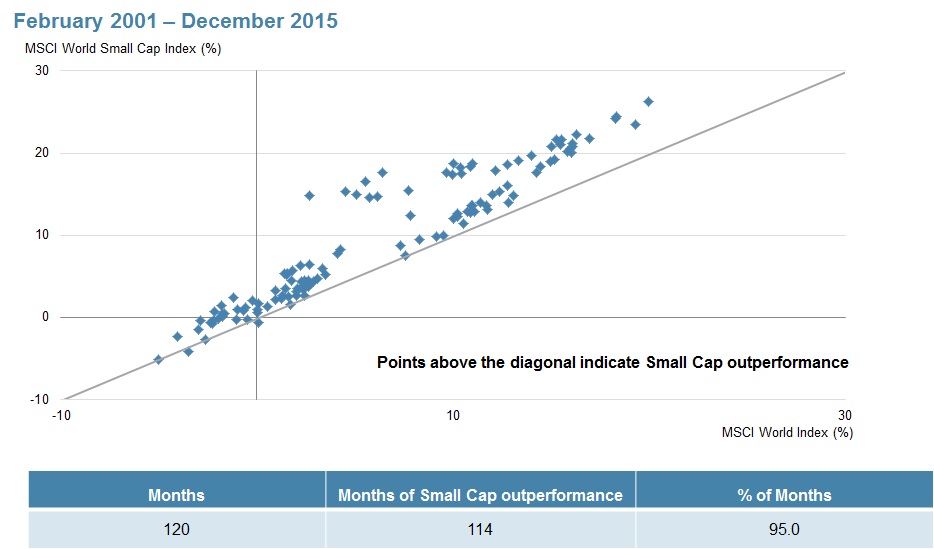 This small-cap performance has historically been enhanced by an active stock selection approach.

Small-cap active managers have had a better record of adding value than their large-cap counterparts.

Over time, small-cap active managers have been able to deliver a more uniform and consistent record of beating the benchmark than large-cap portfolio managers. We believe this is because the market for small caps is not as efficient as the large-cap market.

Globally, much of the small-cap opportunity set is thinly covered by sell-side analysts. Currently, around 35 per cent of small-cap stocks in the MSCI Small Cap Index do not have any sell-side coverage, which would be unthinkable in large or mega-cap equities (see Figure 2). 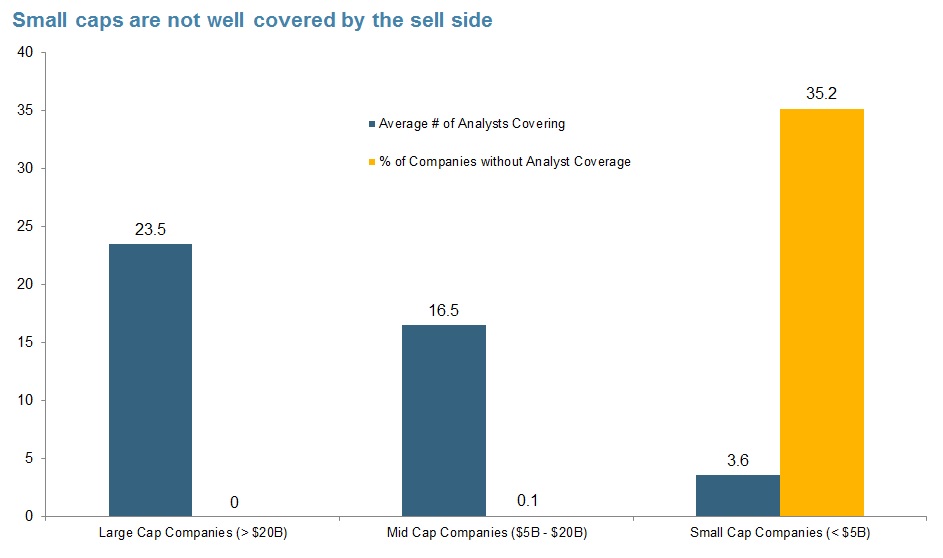 Small caps have proved relatively resilient in the difficult markets we have seen over the last 12 months and we think the outlook for global small caps is positive.

While much of the focus has been on US rate rises, elsewhere monetary policy is still in an expansionary phase.

European Central Bank QE began in March 2015 and will now continue through at least March 2017. In Japan, the Bank of Japan recently lowered deposit rates to -10 basis points, a stimulus measure aimed at encouraging investment.

The beauty of a truly global and active approach is that you can tilt your portfolio towards the areas of the world that are believed to be growing fastest or benefiting from favourable monetary policy settings.

It is true that small caps can exhibit greater short-term volatility than large-cap companies. However, an active manager using fundamental stock selection can look to manage some of this risk.

And when you consider the return trade-off and the alpha potential active managers can offer, we believe small caps remain a potentially compelling risk-adjusted proposition, particularly for Australian investors needing diversification.

Edward Rosenfeld is a portfolio manager/analyst at Lazard Asset Management.