China has gained acclaim as the world’s manufacturing powerhouse, but innovation is flourishing in the world’s most populous nation, says AB’s Tassos Stassopoulos.

But today, innovation is flourishing in the world’s most populous nation, which is rapidly becoming a trendsetter with the potential to disrupt business models globally.

On a recent research trip to China, we were struck by the huge enthusiasm for locally developed smartphones and the entrepreneurial spirit sweeping the country.

Indeed, the number of patents filed by Chinese residents has surged in recent years, both locally and abroad, to exceed the world’s largest developed economies. 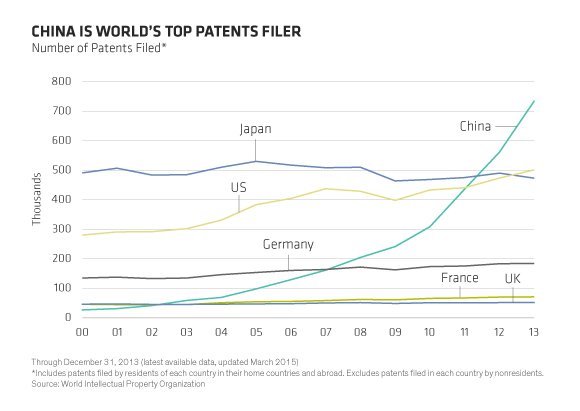 Some companies have received international recognition.

For example, Shenzhen-based Estar Technology Group won the prestigious 2015 CES Innovations Award for its takee1 smartphone, which allows users to touch and interact with its holographic screen.

Corporate innovation reflects the energy of the people.

For example, we met Mr. Wang, a junior human resources administrator, in his modest room in Wuhan, the capital city of Hubei province in central China.

During our conversation, Mr. Wang was transfixed by his new smartphone – a Xiaomi bought for 700 renminbi (US$113) – and was intent on telling us how much better it was than our iPhones.

We were impressed by its features and functionality.

Others we spoke to also wanted to share the excitement they felt in owning a piece of Chinese-made cutting-edge technology.

This type of bottom-up passion can be especially powerful in a vast country like China, where local companies, seeking to commercialise a product, benefit from domestic demand and can build up Chinese distribution to test the waters before going global.

Investors are often slow to recognise a country making the leap from manufacturing to inventing.

In Japan, for example, TV manufacturing peaked during the 1980s, when many in the West still saw “Made in Japan” as a sign of low quality.

It wasn’t until the 1990s – when its TV-makers relocated production to eastern Europe and Mexico – that the country became recognised as a global innovator in the field. Similarly, we believe that it’s only a matter of time before a ‘Made in China’ label – known in the West as a symbol of cheapness – will come to represent novelty and even chic.

Trendsetting is already underway in the retail space.

Urban, young Chinese consumers told us that they have a penchant for “showrooming.”

In other words, they try on clothing in stores and then buy the item online for a better price, including inexpensive next-day delivery.

This is facilitated by apps like TMall, part of China’s e-commerce giant Alibaba, which also owns online payment services Alipay.

What’s more, clothing companies such as Fast Retailing actually endorse such behavior as it helps to track customer preferences and improve store and inventory management.

Why is this happening in China? It’s because of the seamless connectivity between communications technology, payment systems and order fulfilment and logistics.

The Alipay system is so smoothly integrated that the transaction can be completed in a couple of clicks – completely bypassing the major credit card companies. And delivery is often done in less than a day at very low cost.

China is well ahead of the rest of the world in this area.

It has overtaken the US in terms of e-commerce trade.

And it is reshaping the retail model in favor of businesses that are skilled at managing brands, merchandising and inventories, while those that don’t – like department stores – risk obsolescence.

Once other countries catch up on the integrated technological front we would expect the “fast retailing trend” to spread to the young generation around the world. 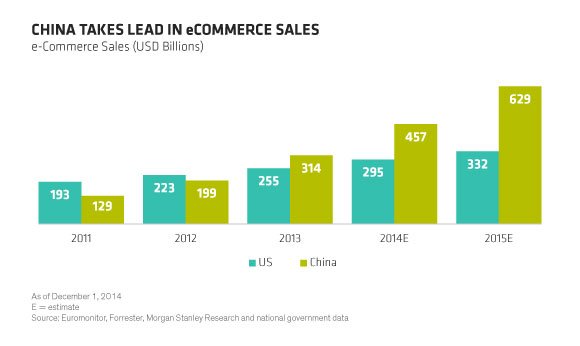 China’s evolution as a hotbed of innovation is creating a pool of world-class management talent, expertise and experience in technology and e-commerce industries that will help it become a global leader in these fields.

Ultimately, this might be the most profound change of all: instead of just charting its own course, China may soon be setting trends that the West will be compelled to follow.

It may be time for investors searching for the next big thing to start looking east.

Tassos Stassopoulos manages the emerging consumer strategy, as well as the global growth and thematic strategies, at AB.